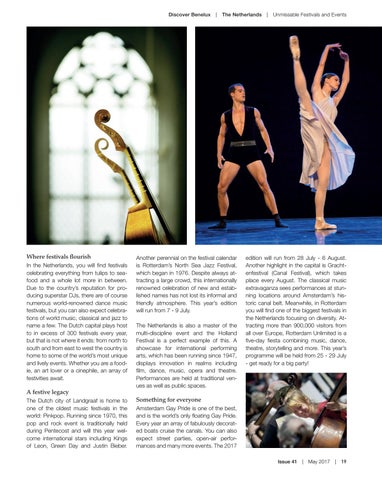 Where festivals flourish In the Netherlands, you will find festivals celebrating everything from tulips to seafood and a whole lot more in between. Due to the country’s reputation for producing superstar DJs, there are of course numerous world-renowned dance music festivals, but you can also expect celebrations of world music, classical and jazz to name a few. The Dutch capital plays host to in excess of 300 festivals every year, but that is not where it ends: from north to south and from east to west the country is home to some of the world’s most unique and lively events. Whether you are a foodie, an art lover or a cinephile, an array of festivities await.

A festive legacy The Dutch city of Landgraaf is home to one of the oldest music festivals in the world: Pinkpop. Running since 1970, this pop and rock event is traditionally held during Pentecost and will this year welcome international stars including Kings of Leon, Green Day and Justin Bieber.

Another perennial on the festival calendar is Rotterdam’s North Sea Jazz Festival, which began in 1976. Despite always attracting a large crowd, this internationally renowned celebration of new and established names has not lost its informal and friendly atmosphere. This year’s edition will run from 7 - 9 July. The Netherlands is also a master of the multi-discipline event and the Holland Festival is a perfect example of this. A showcase for international performing arts, which has been running since 1947, displays innovation in realms including film, dance, music, opera and theatre. Performances are held at traditional venues as well as public spaces.

edition will run from 28 July - 6 August. Another highlight in the capital is Grachtenfestival (Canal Festival), which takes place every August. The classical music extravaganza sees performances at stunning locations around Amsterdam’s historic canal belt. Meanwhile, in Rotterdam you will find one of the biggest festivals in the Netherlands focusing on diversity. Attracting more than 900,000 visitors from all over Europe, Rotterdam Unlimited is a five-day fiesta combining music, dance, theatre, storytelling and more. This year’s programme will be held from 25 - 29 July - get ready for a big party!

Something for everyone Amsterdam Gay Pride is one of the best, and is the world’s only floating Gay Pride. Every year an array of fabulously decorated boats cruise the canals. You can also expect street parties, open-air performances and many more events. The 2017 Issue 41  |  May 2017  |  19