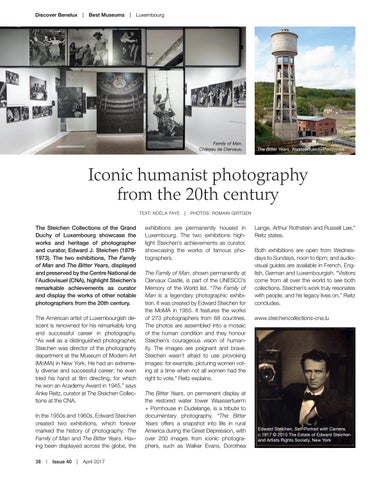 The Steichen Collections of the Grand Duchy of Luxembourg showcase the works and heritage of photographer and curator, Edward J. Steichen (18791973). The two exhibitions, The Family of Man and The Bitter Years, displayed and preserved by the Centre National de l’Audiovisuel (CNA), highlight Steichen’s remarkable achievements as curator and display the works of other notable photographers from the 20th century. The American artist of Luxembourgish descent is renowned for his remarkably long and successful career in photography. “As well as a distinguished photographer, Steichen was director of the photography department at the Museum of Modern Art (MoMA) in New York. He had an extremely diverse and successful career: he even tried his hand at film directing, for which he won an Academy Award in 1945,” says Anke Reitz, curator at The Steichen Collections at the CNA. In the 1950s and 1960s, Edward Steichen created two exhibitions, which forever marked the history of photography: The Family of Man and The Bitter Years. Having been displayed across the globe, the 38  |  Issue 40  |  April 2017

exhibitions are permanently housed in Luxembourg. The two exhibitions highlight Steichen’s achievements as curator, showcasing the works of famous photographers. The Family of Man, shown permanently at Clervaux Castle, is part of the UNESCO’s Memory of the World list. “The Family of Man is a legendary photographic exhibition. It was created by Edward Steichen for the MoMA in 1955. It features the works of 273 photographers from 68 countries. The photos are assembled into a mosaic of the human condition and they honour Steichen’s courageous vision of humanity. The images are poignant and brave. Steichen wasn’t afraid to use provoking images: for example, picturing women voting at a time when not all women had the right to vote,” Reitz explains. The Bitter Years, on permanent display at the restored water tower Waassertuerm + Pomhouse in Dudelange, is a tribute to documentary photography. “The Bitter Years offers a snapshot into life in rural America during the Great Depression, with over 200 images from iconic photographers, such as Walker Evans, Dorothea

Lange, Arthur Rothstein and Russell Lee,” Reitz states. Both exhibitions are open from Wednesdays to Sundays, noon to 6pm; and audiovisual guides are available in French, English, German and Luxembourgish. “Visitors come from all over the world to see both collections. Steichen’s work truly resonates with people, and his legacy lives on,” Reitz concludes. www.steichencollections-cna.lu