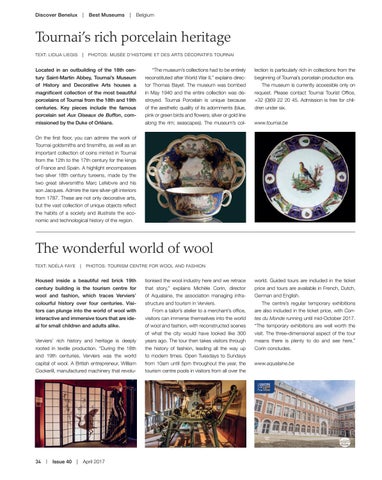 Located in an outbuilding of the 18th century Saint-Martin Abbey, Tournai’s Museum of History and Decorative Arts houses a magnificent collection of the most beautiful porcelains of Tournai from the 18th and 19th centuries. Key pieces include the famous porcelain set Aux Oiseaux de Buffon, commissioned by the Duke of Orléans.

“The museum’s collections had to be entirely reconstituted after World War II,” explains director Thomas Bayet. The museum was bombed in May 1940 and the entire collection was destroyed. Tournai Porcelain is unique because of the aesthetic quality of its adornments (blue, pink or green birds and flowers; silver or gold line along the rim; seascapes). The museum’s col-

lection is particularly rich in collections from the beginning of Tournai’s porcelain production era. The museum is currently accessible only on request. Please contact Tournai Tourist Office, +32 (0)69 22 20 45. Admission is free for children under six. www.tournai.be

On the first floor, you can admire the work of Tournai goldsmiths and tinsmiths, as well as an important collection of coins minted in Tournai from the 12th to the 17th century for the kings of France and Spain. A highlight encompasses two silver 18th century tureens, made by the two great silversmiths Marc Lefebvre and his son Jacques. Admire the rare silver-gilt interiors from 1787. These are not only decorative arts, but the vast collection of unique objects reflect the habits of a society and illustrate the economic and technological history of the region.

Housed inside a beautiful red brick 19th century building is the tourism centre for wool and fashion, which traces Verviers’ colourful history over four centuries. Visitors can plunge into the world of wool with interactive and immersive tours that are ideal for small children and adults alike. Verviers’ rich history and heritage is deeply rooted in textile production. “During the 18th and 19th centuries, Verviers was the world capital of wool. A British entrepreneur, William Cockerill, manufactured machinery that revolu-

tionised the wool industry here and we retrace that story,” explains Michèle Corin, director of Aqualaine, the association managing infrastructure and tourism in Verviers. From a tailor’s atelier to a merchant’s office, visitors can immerse themselves into the world of wool and fashion, with reconstructed scenes of what the city would have looked like 300 years ago. The tour then takes visitors through the history of fashion, leading all the way up to modern times. Open Tuesdays to Sundays from 10am until 5pm throughout the year, the tourism centre pools in visitors from all over the

world. Guided tours are included in the ticket price and tours are available in French, Dutch, German and English. The centre’s regular temporary exhibitions are also included in the ticket price, with Contes du Monde running until mid-October 2017. “The temporary exhibitions are well worth the visit. The three-dimensional aspect of the tour means there is plenty to do and see here,” Corin concludes. www.aqualaine.be