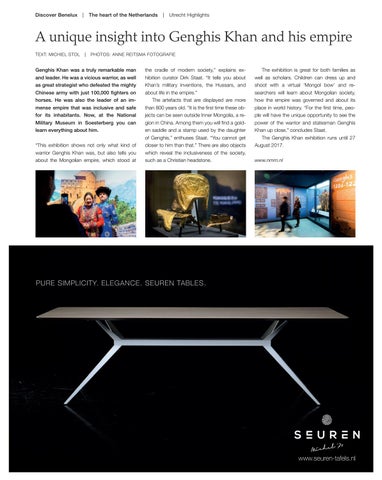 Discover Benelux  |  The heart of the Netherlands  |  Utrecht Highlights

Genghis Khan was a truly remarkable man and leader. He was a vicious warrior, as well as great strategist who defeated the mighty Chinese army with just 100,000 fighters on horses. He was also the leader of an immense empire that was inclusive and safe for its inhabitants. Now, at the National Military Museum in Soesterberg you can learn everything about him. “This exhibition shows not only what kind of warrior Genghis Khan was, but also tells you about the Mongolian empire, which stood at

the cradle of modern society,” explains exhibition curator Dirk Staat. “It tells you about Khan’s military inventions, the Hussars, and about life in the empire.” The artefacts that are displayed are more than 800 years old. “It is the first time these objects can be seen outside Inner Mongolia, a region in China. Among them you will find a golden saddle and a stamp used by the daughter of Genghis,” enthuses Staat. “You cannot get closer to him than that.” There are also objects which reveal the inclusiveness of the society, such as a Christian headstone.

The exhibition is great for both families as well as scholars. Children can dress up and shoot with a virtual ‘Mongol bow’ and researchers will learn about Mongolian society, how the empire was governed and about its place in world history. “For the first time, people will have the unique opportunity to see the power of the warrior and statesman Genghis Khan up close,” concludes Staat. The Genghis Khan exhibition runs until 27 August 2017. www.nmm.nl