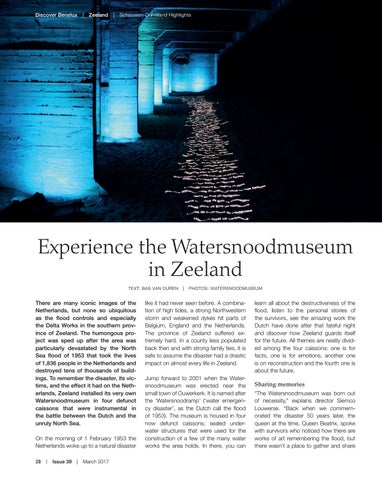 There are many iconic images of the Netherlands, but none so ubiquitous as the flood controls and especially the Delta Works in the southern province of Zeeland. The humongous project was sped up after the area was particularly devastated by the North Sea flood of 1953 that took the lives of 1,836 people in the Netherlands and destroyed tens of thousands of buildings. To remember the disaster, its victims, and the effect it had on the Netherlands, Zeeland installed its very own Watersnoodmuseum in four defunct caissons that were instrumental in the battle between the Dutch and the unruly North Sea. On the morning of 1 February 1953 the Netherlands woke up to a natural disaster 28  |  Issue 39  |  March 2017

like it had never seen before. A combination of high tides, a strong Northwestern storm and weakened dykes hit parts of Belgium, England and the Netherlands. The province of Zeeland suffered extremely hard. In a county less populated back then and with strong family ties, it is safe to assume the disaster had a drastic impact on almost every life in Zeeland. Jump forward to 2001 when the Watersnoodmuseum was erected near the small town of Ouwerkerk. It is named after the ‘Watersnoodramp’ (‘water emergency disaster’, as the Dutch call the flood of 1953). The museum is housed in four now defunct caissons; sealed underwater structures that were used for the construction of a few of the many water works the area holds. In there, you can

learn all about the destructiveness of the flood, listen to the personal stories of the survivors, see the amazing work the Dutch have done after that fateful night and discover how Zeeland guards itself for the future. All themes are neatly divided among the four caissons: one is for facts, one is for emotions, another one is on reconstruction and the fourth one is about the future.

Sharing memories “The Watersnoodmuseum was born out of necessity,” explains director Siemco Louwerse. “Back when we commemorated the disaster 50 years later, the queen at the time, Queen Beatrix, spoke with survivors who noticed how there are works of art remembering the flood, but there wasn’t a place to gather and share