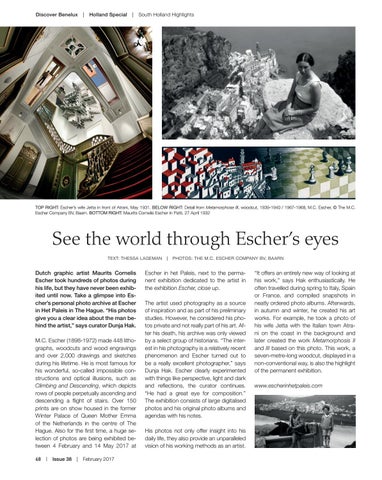 Dutch graphic artist Maurits Cornelis Escher took hundreds of photos during his life, but they have never been exhibited until now. Take a glimpse into Escher’s personal photo archive at Escher in Het Paleis in The Hague. “His photos give you a clear idea about the man behind the artist,” says curator Dunja Hak. M.C. Escher (1898-1972) made 448 lithographs, woodcuts and wood engravings and over 2,000 drawings and sketches during his lifetime. He is most famous for his wonderful, so-called impossible constructions and optical illusions, such as Climbing and Descending, which depicts rows of people perpetually ascending and descending a flight of stairs. Over 150 prints are on show housed in the former Winter Palace of Queen Mother Emma of the Netherlands in the centre of The Hague. Also for the first time, a huge selection of photos are being exhibited between 4 February and 14 May 2017 at 68  |  Issue 38  |  February 2017

Escher in het Paleis, next to the permanent exhibition dedicated to the artist in the exhibition Escher, close up. The artist used photography as a source of inspiration and as part of his preliminary studies. However, he considered his photos private and not really part of his art. After his death, his archive was only viewed by a select group of historians. “The interest in his photography is a relatively recent phenomenon and Escher turned out to be a really excellent photographer,” says Dunja Hak. Escher clearly experimented with things like perspective, light and dark and reflections, the curator continues. “He had a great eye for composition.” The exhibition consists of large digitalised photos and his original photo albums and agendas with his notes. His photos not only offer insight into his daily life, they also provide an unparalleled vision of his working methods as an artist.

“It offers an entirely new way of looking at his work,” says Hak enthusiastically. He often travelled during spring to Italy, Spain or France, and compiled snapshots in neatly ordered photo albums. Afterwards, in autumn and winter, he created his art works. For example, he took a photo of his wife Jetta with the Italian town Atrani on the coast in the background and later created the work Metamorphosis II and III based on this photo. This work, a seven-metre-long woodcut, displayed in a non-conventional way, is also the highlight of the permanent exhibition. www.escherinhetpaleis.com