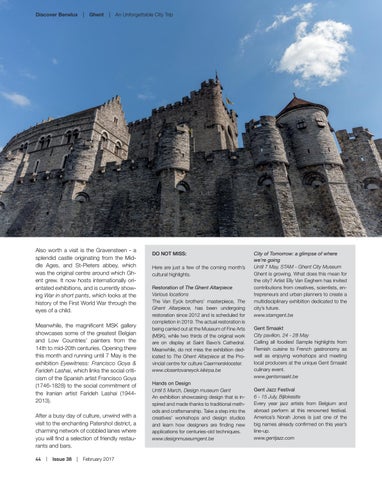 Also worth a visit is the Gravensteen - a splendid castle originating from the Middle Ages, and St-Pieters abbey, which was the original centre around which Ghent grew. It now hosts internationally orientated exhibitions, and is currently showing War in short pants, which looks at the history of the First World War through the eyes of a child. Meanwhile, the magnificent MSK gallery showcases some of the greatest Belgian and Low Countries’ painters from the 14th to mid-20th centuries. Opening there this month and running until 7 May is the exhibition Eyewitness: Francisco Goya & Farideh Lashai, which links the social criticism of the Spanish artist Francisco Goya (1746-1828) to the social commitment of the Iranian artist Farideh Lashai (19442013). After a busy day of culture, unwind with a visit to the enchanting Patershol district, a charming network of cobbled lanes where you will find a selection of friendly restaurants and bars. 44  |  Issue 38  |  February 2017

DO NOT MISS: Here are just a few of the coming month’s cultural highlights. Restoration of The Ghent Altarpiece Various locations The Van Eyck brothers’ masterpiece, The Ghent Altarpiece, has been undergoing restoration since 2012 and is scheduled for completion in 2019. The actual restoration is being carried out at the Museum of Fine Arts (MSK), while two thirds of the original work are on display at Saint Bavo’s Cathedral. Meanwhile, do not miss the exhibition dedicated to The Ghent Altarpiece at the Provincial centre for culture Caermersklooster. www.closertovaneyck.kikirpa.be Hands on Design Until 5 March, Design museum Gent An exhibition showcasing design that is inspired and made thanks to traditional methods and craftsmanship. Take a step into the creatives’ workshops and design studios and learn how designers are finding new applications for centuries-old techniques. www.designmuseumgent.be

City of Tomorrow: a glimpse of where we're going Until 7 May, STAM - Ghent City Museum Ghent is growing. What does this mean for the city? Artist Elly Van Eeghem has invited contributions from creatives, scientists, entrepreneurs and urban planners to create a multidisciplinary exhibition dedicated to the city’s future. www.stamgent.be Gent Smaakt City pavilion, 24 - 28 May Calling all foodies! Sample highlights from Flemish cuisine to French gastronomy as well as enjoying workshops and meeting local producers at the unique Gent Smaakt culinary event. www.gentsmaakt.be Gent Jazz Festival 6 - 15 July, Bijlokesite Every year jazz artists from Belgium and abroad perform at this renowned festival. America’s Norah Jones is just one of the big names already confirmed on this year’s line-up. www.gentjazz.com