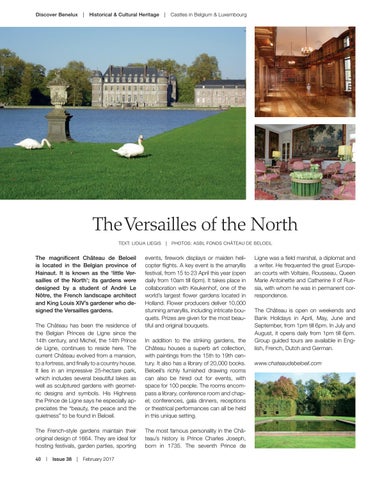 The magnificent Château de Beloeil is located in the Belgian province of Hainaut. It is known as the ‘little Versailles of the North’; its gardens were designed by a student of André Le Nôtre, the French landscape architect and King Louis XIV’s gardener who designed the Versailles gardens. The Château has been the residence of the Belgian Princes de Ligne since the 14th century, and Michel, the 14th Prince de Ligne, continues to reside here. The current Château evolved from a mansion, to a fortress, and finally to a country house. It lies in an impressive 25-hectare park, which includes several beautiful lakes as well as sculptured gardens with geometric designs and symbols. His Highness the Prince de Ligne says he especially appreciates the “beauty, the peace and the quietness” to be found in Beloeil. The French-style gardens maintain their original design of 1664. They are ideal for hosting festivals, garden parties, sporting 40  |  Issue 38  |  February 2017

events, firework displays or maiden helicopter flights. A key event is the amaryllis festival, from 15 to 23 April this year (open daily from 10am till 6pm). It takes place in collaboration with Keukenhof, one of the world’s largest flower gardens located in Holland. Flower producers deliver 10,000 stunning amaryllis, including intricate bouquets. Prizes are given for the most beautiful and original bouquets. In addition to the striking gardens, the Château houses a superb art collection, with paintings from the 15th to 19th century. It also has a library of 20,000 books. Beloeil’s richly furnished drawing rooms can also be hired out for events, with space for 100 people. The rooms encompass a library, conference room and chapel; conferences, gala dinners, receptions or theatrical performances can all be held in this unique setting. The most famous personality in the Château’s history is Prince Charles Joseph, born in 1735. The seventh Prince de

Ligne was a field marshal, a diplomat and a writer. He frequented the great European courts with Voltaire, Rousseau, Queen Marie Antoinette and Catherine II of Russia, with whom he was in permanent correspondence. The Château is open on weekends and Bank Holidays in April, May, June and September, from 1pm till 6pm. In July and August, it opens daily from 1pm till 6pm. Group guided tours are available in English, French, Dutch and German. www.chateaudebeloeil.com