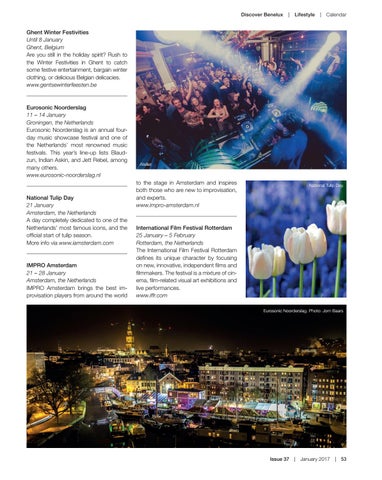 Ghent Winter Festivities Until 8 January Ghent, Belgium Are you still in the holiday spirit? Rush to the Winter Festivities in Ghent to catch some festive entertainment, bargain winter clothing, or delicious Belgian delicacies. www.gentsewinterfeesten.be

National Tulip Day 21 January Amsterdam, the Netherlands A day completely dedicated to one of the Netherlands’ most famous icons, and the official start of tulip season. More info via www.iamsterdam.com

to the stage in Amsterdam and inspires both those who are new to improvisation, and experts. www.impro-amsterdam.nl