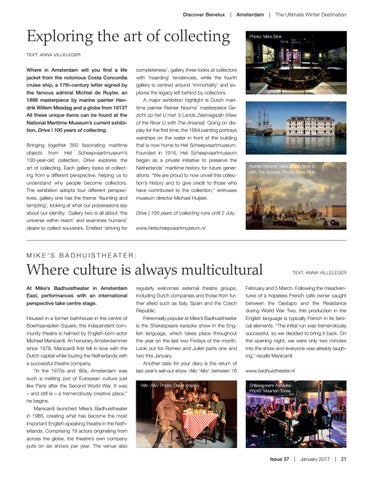 Exploring the art of collecting

Where in Amsterdam will you find a life jacket from the notorious Costa Concordia cruise ship, a 17th-century letter signed by the famous admiral Michiel de Ruyter, an 1898 masterpiece by marine painter Hendrik Willem Mesdag and a globe from 1613? All these unique items can be found at the National Maritime Museum’s current exhibition, Drive | 100 years of collecting. Bringing together 350 fascinating maritime objects from Het Scheepvaartmuseum’s 100-year-old collection, Drive explores the art of collecting. Each gallery looks at collecting from a different perspective, helping us to understand why people become collectors. The exhibition adopts four different perspectives; gallery one has the theme ‘flaunting and tempting’, looking at what our possessions say about our identity. Gallery two is all about ‘the universe within reach’ and examines humans’ desire to collect souvenirs. Entitled ‘striving for

completeness’, gallery three looks at collectors with ‘hoarding’ tendencies, while the fourth gallery is centred around ‘immortality’ and explores the legacy left behind by collectors. A major exhibition highlight is Dutch maritime painter Reinier Nooms’ masterpiece Gezicht op het IJ met ’s Lands Zeemagazijn (View of the River IJ with The Arsenal). Going on display for the first time, the 1664 painting portrays warships on the water in front of the building that is now home to Het Scheepvaartmuseum. Founded in 1916, Het Scheepvaartmuseum began as a private initiative to preserve the Netherlands’ maritime history for future generations. “We are proud to now unveil this collection’s history and to give credit to those who have contributed to the collection,” enthuses museum director Michael Huijser. Drive | 100 years of collecting runs until 2 July. www.hetscheepvaartmuseum.nl

Reinier Nooms’ View of the River IJ with The Arsenal. Photo: Mike Bink

Where culture is always multicultural At Mike’s Badhuistheater in Amsterdam East, performances with an international perspective take centre stage. Housed in a former bathhouse in the centre of Boerhaaveplein Square, this independent community theatre is helmed by English-born actor Michael Manicardi. An honorary Amsterdammer since 1978, Manicardi first fell in love with the Dutch capital while touring the Netherlands with a successful theatre company. “In the 1970s and ‘80s, Amsterdam was such a melting pot of European culture just like Paris after the Second World War. It was – and still is – a tremendously creative place,” he begins. Manicardi launched Mike’s Badhuistheater in 1985, creating what has become the most important English-speaking theatre in the Netherlands. Comprising 19 actors originating from across the globe, the theatre’s own company puts on six shows per year. The venue also

regularly welcomes external theatre groups, including Dutch companies and those from further afield such as Italy, Spain and the Czech Republic. Perennially popular at Mike’s Badhuistheater is the Shakespeare karaoke show in the English language, which takes place throughout the year on the last two Fridays of the month. Look out for Romeo and Juliet parts one and two this January. Another date for your diary is the return of last year’s sell-out show ‘Allo ‘Allo! between 16 ‘Allo ‘Allo! Photo: David Kopsky

February and 5 March. Following the misadventures of a hopeless French café owner caught between the Gestapo and the Resistance during World War Two, this production in the English language is typically French in its farcical elements. “The initial run was tremendously successful, so we decided to bring it back. On the opening night, we were only two minutes into the show and everyone was already laughing,” recalls Manicardi. www.badhuistheater.nl Shakespeare Karaoke. Photo: Maarten Toner