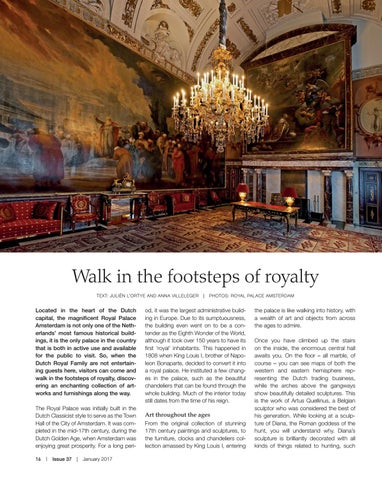 Located in the heart of the Dutch capital, the magnificent Royal Palace Amsterdam is not only one of the Netherlands’ most famous historical buildings, it is the only palace in the country that is both in active use and available for the public to visit. So, when the Dutch Royal Family are not entertaining guests here, visitors can come and walk in the footsteps of royalty, discovering an enchanting collection of artworks and furnishings along the way. The Royal Palace was initially built in the Dutch Classicist style to serve as the Town Hall of the City of Amsterdam. It was completed in the mid-17th century, during the Dutch Golden Age, when Amsterdam was enjoying great prosperity. For a long peri16  |  Issue 37  |  January 2017

od, it was the largest administrative building in Europe. Due to its sumptuousness, the building even went on to be a contender as the Eighth Wonder of the World, although it took over 150 years to have its first ‘royal’ inhabitants. This happened in 1808 when King Louis I, brother of Napoleon Bonaparte, decided to convert it into a royal palace. He instituted a few changes in the palace, such as the beautiful chandeliers that can be found through the whole building. Much of the interior today still dates from the time of his reign.

Art throughout the ages From the original collection of stunning 17th century paintings and sculptures, to the furniture, clocks and chandeliers collection amassed by King Louis I, entering

the palace is like walking into history, with a wealth of art and objects from across the ages to admire. Once you have climbed up the stairs on the inside, the enormous central hall awaits you. On the floor – all marble, of course – you can see maps of both the western and eastern hemisphere representing the Dutch trading business, while the arches above the gangways show beautifully detailed sculptures. This is the work of Artus Quellinus, a Belgian sculptor who was considered the best of his generation. While looking at a sculpture of Diana, the Roman goddess of the hunt, you will understand why. Diana’s sculpture is brilliantly decorated with all kinds of things related to hunting, such