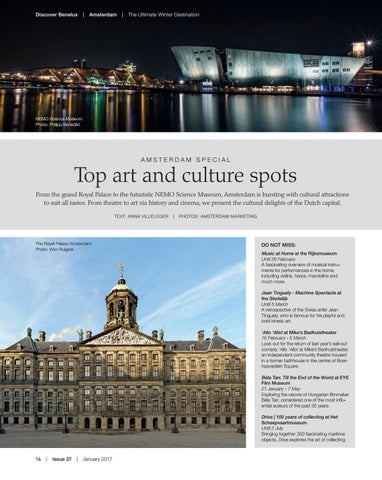 Top art and culture spots From the grand Royal Palace to the futuristic NEMO Science Museum, Amsterdam is bursting with cultural attractions to suit all tastes. From theatre to art via history and cinema, we present the cultural delights of the Dutch capital. TEXT: ANNA VILLELEGER  |  PHOTOS: AMSTERDAM MARKETING

DO NOT MISS: Music at Home at the Rijksmuseum Until 26 February A fascinating overview of musical instruments for performances in the home, including violins, harps, mandolins and much more. Jean Tinguely - Machine Spectacle at the Stedelijk Until 5 March A retrospective of the Swiss artist Jean Tinguely, who is famous for his playful and bold kinetic art. ‘Allo ‘Allo! at Mike’s Badhuistheater 16 February - 5 March Look out for the return of last year’s sell-out comedy ‘Allo ‘Allo! at Mike’s Badhuistheater, an independent community theatre housed in a former bathhouse in the centre of Boerhaaveplein Square. Béla Tarr, Till the End of the World at EYE Film Museum 21 January - 7 May Exploring the oeuvre of Hungarian filmmaker Béla Tarr, considered one of the most influential auteurs of the past 30 years. Drive | 100 years of collecting at Het Scheepvaartmuseum Until 2 July Bringing together 350 fascinating maritime objects, Drive explores the art of collecting.