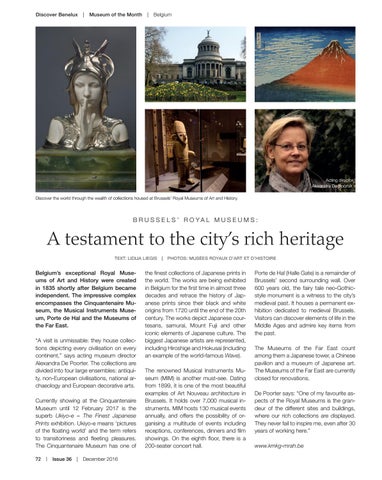 Acting director Alexandra De Poorter. Discover the world through the wealth of collections housed at Brussels’ Royal Museums of Art and History.

Belgium’s exceptional Royal Museums of Art and History were created in 1835 shortly after Belgium became independent. The impressive complex encompasses the Cinquantenaire Museum, the Musical Instruments Museum, Porte de Hal and the Museums of the Far East. “A visit is unmissable: they house collections depicting every civilisation on every continent,” says acting museum director Alexandra De Poorter. The collections are divided into four large ensembles: antiquity, non-European civilisations, national archaeology and European decorative arts. Currently showing at the Cinquantenaire Museum until 12 February 2017 is the superb Ukiyo-e – The Finest Japanese Prints exhibition. Ukiyo-e means ‘pictures of the floating world’ and the term refers to transitoriness and fleeting pleasures. The Cinquantenaire Museum has one of 72  |  Issue 36  |  December 2016

the finest collections of Japanese prints in the world. The works are being exhibited in Belgium for the first time in almost three decades and retrace the history of Japanese prints since their black and white origins from 1720 until the end of the 20th century. The works depict Japanese courtesans, samurai, Mount Fuji and other iconic elements of Japanese culture. The biggest Japanese artists are represented, including Hiroshige and Hokusai (including an example of the world-famous Wave). The renowned Musical Instruments Museum (MIM) is another must-see. Dating from 1899, it is one of the most beautiful examples of Art Nouveau architecture in Brussels. It holds over 7,000 musical instruments. MIM hosts 130 musical events annually, and offers the possibility of organising a multitude of events including receptions, conferences, dinners and film showings. On the eighth floor, there is a 200-seater concert hall.

Porte de Hal (Halle Gate) is a remainder of Brussels’ second surrounding wall. Over 600 years old, the fairy tale neo-Gothicstyle monument is a witness to the city’s medieval past. It houses a permanent exhibition dedicated to medieval Brussels. Visitors can discover elements of life in the Middle Ages and admire key items from the past. The Museums of the Far East count among them a Japanese tower, a Chinese pavilion and a museum of Japanese art. The Museums of the Far East are currently closed for renovations. De Poorter says: “One of my favourite aspects of the Royal Museums is the grandeur of the different sites and buildings, where our rich collections are displayed. They never fail to inspire me, even after 30 years of working here.” www.kmkg-mrah.be