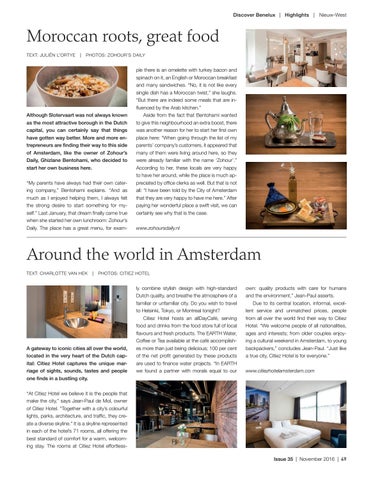 Although Slotervaart was not always known as the most attractive borough in the Dutch capital, you can certainly say that things have gotten way better. More and more entrepreneurs are finding their way to this side of Amsterdam, like the owner of Zohour’s Daily, Ghizlane Bentohami, who decided to start her own business here. “My parents have always had their own catering company,” Bentohami explains. “And as much as I enjoyed helping them, I always felt the strong desire to start something for myself.” Last January, that dream finally came true when she started her own lunchroom: Zohour’s Daily. The place has a great menu, for exam-

ple there is an omelette with turkey bacon and spinach on it, an English or Moroccan breakfast and many sandwiches. “No, it is not like every single dish has a Moroccan twist,” she laughs. “But there are indeed some meals that are influenced by the Arab kitchen.” Aside from the fact that Bentohami wanted to give this neighbourhood an extra boost, there was another reason for her to start her first own place here: “When going through the list of my parents’ company’s customers, it appeared that many of them were living around here, so they were already familiar with the name ‘Zohour’.” According to her, these locals are very happy to have her around, while the place is much appreciated by office clerks as well. But that is not all: “I have been told by the City of Amsterdam that they are very happy to have me here.” After paying her wonderful place a swift visit, we can certainly see why that is the case. www.zohoursdaily.nl

A gateway to iconic cities all over the world, located in the very heart of the Dutch capital: Citiez Hotel captures the unique marriage of sights, sounds, tastes and people one finds in a bustling city.

ly combine stylish design with high-standard Dutch quality, and breathe the atmosphere of a familiar or unfamiliar city. Do you wish to travel to Helsinki, Tokyo, or Montreal tonight? Citiez Hotel hosts an allDayCafé, serving food and drinks from the food store full of local flavours and fresh products. The EARTH Water, Coffee or Tea available at the café accomplishes more than just being delicious; 100 per cent of the net profit generated by these products are used to finance water projects. “In EARTH we found a partner with morals equal to our

own: quality products with care for humans and the environment,” Jean-Paul asserts. Due to its central location, informal, excellent service and unmatched prices, people from all over the world find their way to Citiez Hotel. “We welcome people of all nationalities, ages and interests; from older couples enjoying a cultural weekend in Amsterdam, to young backpackers,” concludes Jean-Paul. “Just like a true city, Citiez Hotel is for everyone.” www.citiezhotelamsterdam.com

“At Citiez Hotel we believe it is the people that make the city,” says Jean-Paul de Mol, owner of Citiez Hotel. “Together with a city’s colourful lights, parks, architecture, and traffic, they create a diverse skyline.” It is a skyline represented in each of the hotel’s 71 rooms, all offering the best standard of comfort for a warm, welcoming stay. The rooms at Citiez Hotel effortlessIssue 35 | November 2016 | 49