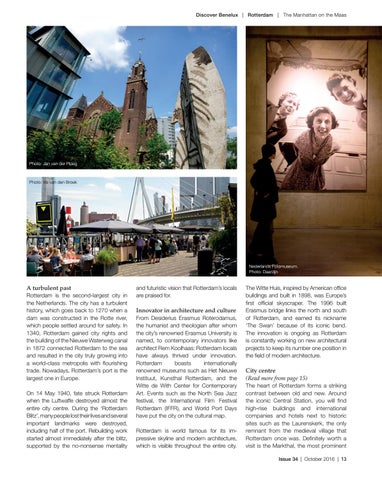 Discover Benelux | Rotterdam | The Manhattan on the Maas

A turbulent past Rotterdam is the second-largest city in the Netherlands. The city has a turbulent history, which goes back to 1270 when a dam was constructed in the Rotte river, which people settled around for safety. In 1340, Rotterdam gained city rights and the building of the Nieuwe Waterweg canal in 1872 connected Rotterdam to the sea and resulted in the city truly growing into a world-class metropolis with flourishing trade. Nowadays, Rotterdam’s port is the largest one in Europe. On 14 May 1940, fate struck Rotterdam when the Luftwaffe destroyed almost the entire city centre. During the ‘Rotterdam Blitz’, many people lost their lives and several important landmarks were destroyed, including half of the port. Rebuilding work started almost immediately after the blitz, supported by the no-nonsense mentality

and futuristic vision that Rotterdam’s locals are praised for.

Innovator in architecture and culture From Desiderius Erasmus Roterodamus, the humanist and theologian after whom the city’s renowned Erasmus University is named, to contemporary innovators like architect Rem Koolhaas: Rotterdam locals have always thrived under innovation. Rotterdam boasts internationally renowned museums such as Het Nieuwe Instituut, Kunsthal Rotterdam, and the Witte de With Center for Contemporary Art. Events such as the North Sea Jazz festival, the International Film Festival Rotterdam (IFFR), and World Port Days have put the city on the cultural map. Rotterdam is world famous for its impressive skyline and modern architecture, which is visible throughout the entire city.

The Witte Huis, inspired by American office buildings and built in 1898, was Europe’s first official skyscraper. The 1996 built Erasmus bridge links the north and south of Rotterdam, and earned its nickname ‘The Swan’ because of its iconic bend. The innovation is ongoing as Rotterdam is constantly working on new architectural projects to keep its number one position in the field of modern architecture.

City centre (Read more from page 15) The heart of Rotterdam forms a striking contrast between old and new. Around the iconic Central Station, you will find high-rise buildings and international companies and hotels next to historic sites such as the Laurenskerk, the only remnant from the medieval village that Rotterdam once was. Definitely worth a visit is the Markthal, the most prominent Issue 34 | October 2016 | 13