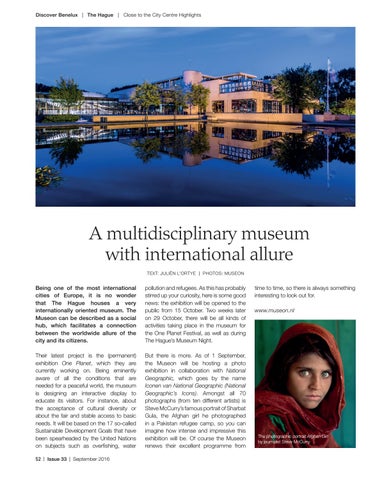 Discover Benelux | The Hague | Close to the City Centre Highlights

Being one of the most international cities of Europe, it is no wonder that The Hague houses a very internationally oriented museum. The Museon can be described as a social hub, which facilitates a connection between the worldwide allure of the city and its citizens.

pollution and refugees. As this has probably stirred up your curiosity, here is some good news: the exhibition will be opened to the public from 15 October. Two weeks later on 29 October, there will be all kinds of activities taking place in the museum for the One Planet Festival, as well as during The Hague’s Museum Night.

Their latest project is the (permanent) exhibition One Planet, which they are currently working on. Being eminently aware of all the conditions that are needed for a peaceful world, the museum is designing an interactive display to educate its visitors. For instance, about the acceptance of cultural diversity or about the fair and stable access to basic needs. It will be based on the 17 so-called Sustainable Development Goals that have been spearheaded by the United Nations on subjects such as overfishing, water

But there is more. As of 1 September, the Museon will be hosting a photo exhibition in collaboration with National Geographic, which goes by the name Iconen van National Geographic (National Geographic’s Icons). Amongst all 70 photographs (from ten different artists) is Steve McCurry’s famous portrait of Sharbat Gula, the Afghan girl he photographed in a Pakistan refugee camp, so you can imagine how intense and impressive this exhibition will be. Of course the Museon renews their excellent programme from

time to time, so there is always something interesting to look out for. www.museon.nl