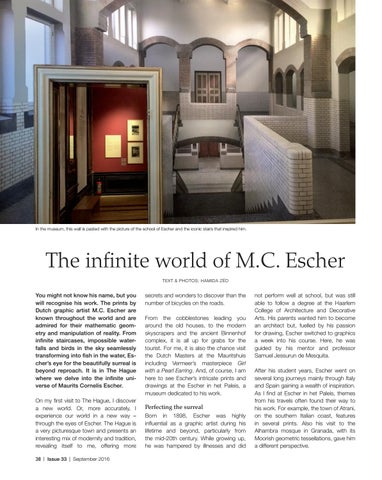 In the museum, this wall is pasted with the picture of the school of Escher and the iconic stairs that inspired him.

You might not know his name, but you will recognise his work. The prints by Dutch graphic artist M.C. Escher are known throughout the world and are admired for their mathematic geometry and manipulation of reality. From infinite staircases, impossible waterfalls and birds in the sky seamlessly transforming into fish in the water, Escher’s eye for the beautifully surreal is beyond reproach. It is in The Hague where we delve into the infinite universe of Maurits Cornelis Escher. On my first visit to The Hague, I discover a new world. Or, more accurately, I experience our world in a new way – through the eyes of Escher. The Hague is a very picturesque town and presents an interesting mix of modernity and tradition, revealing itself to me, offering more 38 | Issue 33 | September 2016

secrets and wonders to discover than the number of bicycles on the roads. From the cobblestones leading you around the old houses, to the modern skyscrapers and the ancient Binnenhof complex, it is all up for grabs for the tourist. For me, it is also the chance visit the Dutch Masters at the Mauritshuis including Vermeer’s masterpiece Girl with a Pearl Earring. And, of course, I am here to see Escher’s intricate prints and drawings at the Escher in het Paleis, a museum dedicated to his work.

Perfecting the surreal Born in 1898, Escher was highly influential as a graphic artist during his lifetime and beyond, particularly from the mid-20th century. While growing up, he was hampered by illnesses and did

not perform well at school, but was still able to follow a degree at the Haarlem College of Architecture and Decorative Arts. His parents wanted him to become an architect but, fuelled by his passion for drawing, Escher switched to graphics a week into his course. Here, he was guided by his mentor and professor Samuel Jessurun de Mesquita. After his student years, Escher went on several long journeys mainly through Italy and Spain gaining a wealth of inspiration. As I find at Escher in het Paleis, themes from his travels often found their way to his work. For example, the town of Atrani, on the southern Italian coast, features in several prints. Also his visit to the Alhambra mosque in Granada, with its Moorish geometric tessellations, gave him a different perspective.