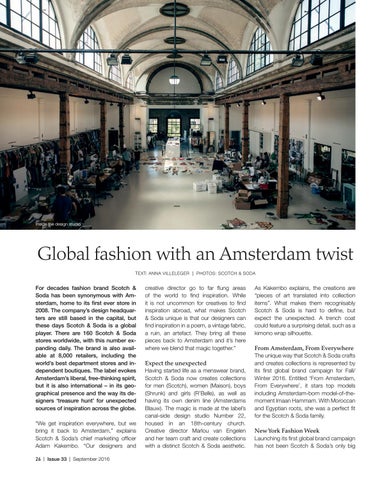 Inside the design studio.

For decades fashion brand Scotch &amp; Soda has been synonymous with Amsterdam, home to its first ever store in 2008. The company’s design headquarters are still based in the capital, but these days Scotch &amp; Soda is a global player. There are 160 Scotch &amp; Soda stores worldwide, with this number expanding daily. The brand is also available at 8,000 retailers, including the world’s best department stores and independent boutiques. The label evokes Amsterdam’s liberal, free-thinking spirit, but it is also international – in its geographical presence and the way its designers ‘treasure hunt’ for unexpected sources of inspiration across the globe. “We get inspiration everywhere, but we bring it back to Amsterdam,” explains Scotch &amp; Soda’s chief marketing officer Adam Kakembo. “Our designers and 26 | Issue 33 | September 2016

creative director go to far flung areas of the world to find inspiration. While it is not uncommon for creatives to find inspiration abroad, what makes Scotch &amp; Soda unique is that our designers can find inspiration in a poem, a vintage fabric, a ruin, an artefact. They bring all these pieces back to Amsterdam and it’s here where we blend that magic together.”

Expect the unexpected Having started life as a menswear brand, Scotch &amp; Soda now creates collections for men (Scotch), women (Maison), boys (Shrunk) and girls (R’Belle), as well as having its own denim line (Amsterdams Blauw). The magic is made at the label’s canal-side design studio Number 22, housed in an 18th-century church. Creative director Marlou van Engelen and her team craft and create collections with a distinct Scotch &amp; Soda aesthetic.

As Kakembo explains, the creations are “pieces of art translated into collection items”. What makes them recognisably Scotch &amp; Soda is hard to define, but expect the unexpected. A trench coat could feature a surprising detail, such as a kimono wrap silhouette.

From Amsterdam, From Everywhere The unique way that Scotch &amp; Soda crafts and creates collections is represented by its first global brand campaign for Fall/ Winter 2016. Entitled ‘From Amsterdam, From Everywhere’, it stars top models including Amsterdam-born model-of-themoment Imaan Hammam. With Moroccan and Egyptian roots, she was a perfect fit for the Scotch &amp; Soda family.