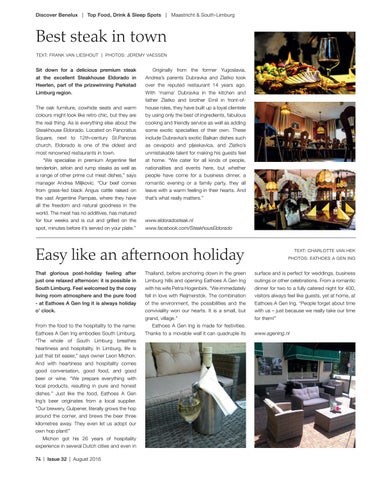 Sit down for a delicious premium steak at the excellent Steakhouse Eldorado in Heerlen, part of the prizewinning Parkstad Limburg region. The oak furniture, cowhide seats and warm colours might look like retro chic, but they are the real thing. As is everything else about the Steakhouse Eldorado. Located on Pancratius Square, next to 12th-century St.Pancras church, Eldorado is one of the oldest and most renowned restaurants in town. “We specialise in premium Argentine filet tenderloin, sirloin and rump steaks as well as a range of other prime cut meat dishes,” says manager Andrea Miljkovic. “Our beef comes from grass-fed black Angus cattle raised on the vast Argentine Pampas, where they have all the freedom and natural goodness in the world. The meat has no additives, has matured for four weeks and is cut and grilled on the spot, minutes before it’s served on your plate.”

Originally from the former Yugoslavia, Andrea’s parents Dubravka and Zlatko took over the reputed restaurant 14 years ago. With ‘mama’ Dubravka in the kitchen and father Zlatko and brother Emil in front-ofhouse roles, they have built up a loyal clientele by using only the best of ingredients, fabulous cooking and friendly service as well as adding some exotic specialties of their own. These include Dubravka’s exotic Balkan dishes such as cevapcici and pljeskavica, and Zlatko’s unmistakable talent for making his guests feel at home. “We cater for all kinds of people, nationalities and events here, but whether people have come for a business dinner, a romantic evening or a family party, they all leave with a warm feeling in their hearts. And that’s what really matters.”

Easy like an afternoon holiday That glorious post-holiday feeling after just one relaxed afternoon: it is possible in South Limburg. Feel welcomed by the cosy living room atmosphere and the pure food - at Eathoes A Gen Ing it is always holiday o’ clock. From the food to the hospitality to the name: Eathoes A Gen Ing embodies South Limburg. “The whole of South Limburg breathes heartiness and hospitality. In Limburg, life is just that bit easier,” says owner Leon Michon. And with heartiness and hospitality comes good conversation, good food, and good beer or wine. “We prepare everything with local products, resulting in pure and honest dishes.” Just like the food, Eathoes A Gen Ing’s beer originates from a local supplier. “Our brewery, Gulpener, literally grows the hop around the corner, and brews the beer three kilometres away. They even let us adopt our own hop plant!” Michon got his 26 years of hospitality experience in several Dutch cities and even in 74 | Issue 32 | August 2016

Thailand, before anchoring down in the green Limburg hills and opening Eathoes A Gen Ing with his wife Petra Hogenbirk. “We immediately fell in love with Reijmerstok. The combination of the environment, the possibilities and the conviviality won our hearts. It is a small, but grand, village.” Eathoes A Gen Ing is made for festivities. Thanks to a movable wall it can quadruple its

surface and is perfect for weddings, business outings or other celebrations. From a romantic dinner for two to a fully catered night for 400, visitors always feel like guests, yet at home, at Eathoes A Gen Ing. “People forget about time with us – just because we really take our time for them!” www.agening.nl