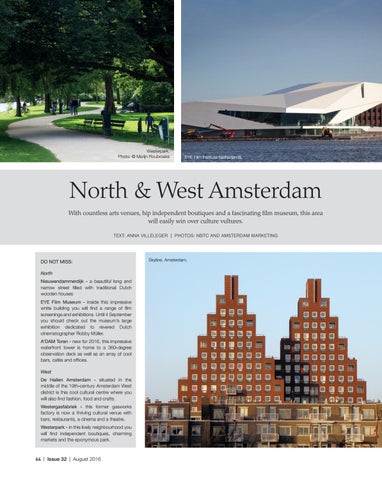 DO NOT MISS: North Nieuwendammerdijk - a beautiful long and narrow street filled with traditional Dutch wooden houses EYE Film Museum - inside this impressive white building you will find a range of film screenings and exhibitions. Until 4 September you should check out the museum’s large exhibition dedicated to revered Dutch cinematographer Robby Müller. A’DAM Toren - new for 2016, this impressive waterfront tower is home to a 360-degree observation deck as well as an array of cool bars, cafés and offices. West De Hallen Amsterdam - situated in the middle of the 19th-century Amsterdam West district is this cool cultural centre where you will also find fashion, food and crafts. Westergasfabriek - this former gasworks factory is now a thriving cultural venue with bars, restaurants, a cinema and a theatre. Westerpark - in this lively neighbourhood you will find independent boutiques, charming markets and the eponymous park.