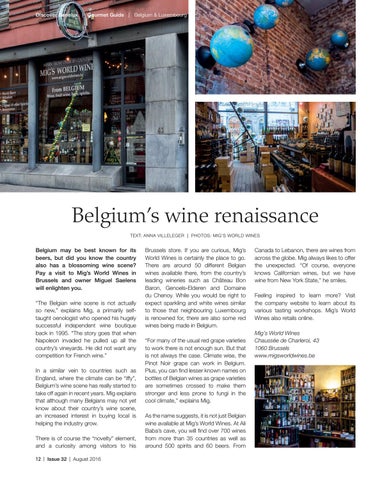 Belgium may be best known for its beers, but did you know the country also has a blossoming wine scene? Pay a visit to Mig’s World Wines in Brussels and owner Miguel Saelens will enlighten you. “The Belgian wine scene is not actually so new,” explains Mig, a primarily selftaught oenologist who opened his hugely successful independent wine boutique back in 1995. “The story goes that when Napoleon invaded he pulled up all the country’s vineyards. He did not want any competition for French wine.” In a similar vein to countries such as England, where the climate can be “iffy”, Belgium’s wine scene has really started to take off again in recent years. Mig explains that although many Belgians may not yet know about their country’s wine scene, an increased interest in buying local is helping the industry grow. There is of course the “novelty” element, and a curiosity among visitors to his 12 | Issue 32 | August 2016

Brussels store. If you are curious, Mig’s World Wines is certainly the place to go. There are around 50 different Belgian wines available there, from the country’s leading wineries such as Château Bon Baron, Genoels-Elderen and Domaine du Chenoy. While you would be right to expect sparkling and white wines similar to those that neighbouring Luxembourg is renowned for, there are also some red wines being made in Belgium. “For many of the usual red grape varieties to work there is not enough sun. But that is not always the case. Climate wise, the Pinot Noir grape can work in Belgium. Plus, you can find lesser known names on bottles of Belgian wines as grape varieties are sometimes crossed to make them stronger and less prone to fungi in the cool climate,” explains Mig. As the name suggests, it is not just Belgian wine available at Mig’s World Wines. At Ali Baba’s cave, you will find over 700 wines from more than 35 countries as well as around 500 spirits and 60 beers. From

Canada to Lebanon, there are wines from across the globe. Mig always likes to offer the unexpected. “Of course, everyone knows Californian wines, but we have wine from New York State,” he smiles. Feeling inspired to learn more? Visit the company website to learn about its various tasting workshops. Mig’s World Wines also retails online. Mig’s World Wines Chaussée de Charleroi, 43 1060 Brussels www.migsworldwines.be