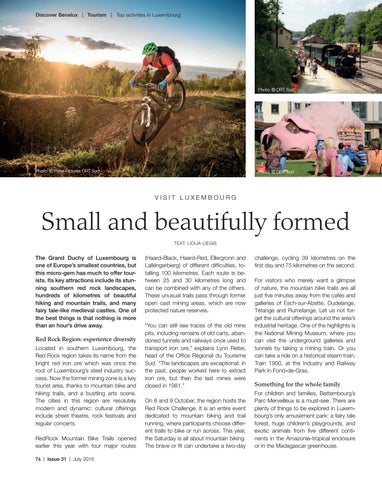 The Grand Duchy of Luxembourg is one of Europe’s smallest countries, but this micro-gem has much to offer tourists. Its key attractions include its stunning southern red rock landscapes, hundreds of kilometres of beautiful hiking and mountain trails, and many fairy tale-like medieval castles. One of the best things is that nothing is more than an hour’s drive away.

Red Rock Region: experience diversity Located in southern Luxembourg, the Red Rock region takes its name from the bright red iron ore which was once the root of Luxembourg’s steel industry success. Now the former mining zone is a key tourist area, thanks to mountain bike and hiking trails, and a bustling arts scene. The cities in this region are resolutely modern and dynamic: cultural offerings include street theatre, rock festivals and regular concerts. RedRock Mountain Bike Trails opened earlier this year with four major routes 76 | Issue 31 | July 2016

(Haard-Black, Haard-Red, Ellergronn and Lalléngerbierg) of different difficulties, totalling 100 kilometres. Each route is between 25 and 30 kilometres long and can be combined with any of the others. These unusual trails pass through former open cast mining areas, which are now protected nature reserves.

challenge, cycling 39 kilometres on the first day and 75 kilometres on the second. For visitors who merely want a glimpse of nature, the mountain bike trails are all just five minutes away from the cafés and galleries of Esch-sur-Alzette, Dudelange, Tétange and Rumelange. Let us not forget the cultural offerings around the area’s industrial heritage. One of the highlights is the National Mining Museum, where you can visit the underground galleries and tunnels by taking a mining train. Or you can take a ride on a historical steam train, Train 1900, at the Industry and Railway Park in Fond-de-Gras.

“You can still see traces of the old mine pits, including remains of old carts, abandoned tunnels and railways once used to transport iron ore,” explains Lynn Reiter, head of the Office Régional du Tourisme Sud. “The landscapes are exceptional: in the past, people worked here to extract iron ore, but then the last mines were closed in 1981.”

Something for the whole family

On 8 and 9 October, the region hosts the Red Rock Challenge. It is an entire event dedicated to mountain biking and trail running, where participants choose different trails to bike or run across. This year, the Saturday is all about mountain biking. The brave or fit can undertake a two-day

For children and families, Bettembourg’s Parc Merveilleux is a must-see. There are plenty of things to be explored in Luxembourg’s only amusement park: a fairy tale forest, huge children’s playgrounds, and exotic animals from five different continents in the Amazonia-tropical enclosure or in the Madagascar greenhouse.