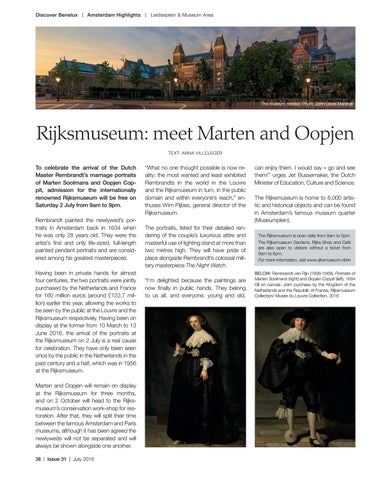 To celebrate the arrival of the Dutch Master Rembrandt’s marriage portraits of Marten Soolmans and Oopjen Coppit, admission for the internationally renowned Rijksmuseum will be free on Saturday 2 July from 9am to 9pm. Rembrandt painted the newlywed’s portraits in Amsterdam back in 1634 when he was only 28 years old. They were the artist’s first and only life-sized, full-length painted pendant portraits and are considered among his greatest masterpieces. Having been in private hands for almost four centuries, the two portraits were jointly purchased by the Netherlands and France for 160 million euros (around £122.7 million) earlier this year, allowing the works to be seen by the public at the Louvre and the Rijksmuseum respectively. Having been on display at the former from 10 March to 13 June 2016, the arrival of the portraits at the Rijksmuseum on 2 July is a real cause for celebration. They have only been seen once by the public in the Netherlands in the past century and a half, which was in 1956 at the Rijksmuseum. Marten and Oopjen will remain on display at the Rijksmuseum for three months, and on 2 October will head to the Rijksmuseum’s conservation work-shop for restoration. After that, they will split their time between the famous Amsterdam and Paris museums, although it has been agreed the newlyweds will not be separated and will always be shown alongside one another. 38 | Issue 31 | July 2016

“What no one thought possible is now reality: the most wanted and least exhibited Rembrandts in the world in the Louvre and the Rijksmuseum in turn, in the public domain and within everyone’s reach,” enthuses Wim Pijbes, general director of the Rijksmuseum. The portraits, feted for their detailed rendering of the couple’s luxurious attire and masterful use of lighting stand at more than two metres high. They will have pride of place alongside Rembrandt’s colossal military masterpiece The Night Watch. “I’m delighted because the paintings are now finally in public hands. They belong to us all, and everyone, young and old,

can enjoy them. I would say – go and see them!” urges Jet Bussemaker, the Dutch Minister of Education, Culture and Science. The Rijksmuseum is home to 8,000 artistic and historical objects and can be found in Amsterdam’s famous museum quarter (Museumplein). The Rijksmuseum is open daily from 9am to 5pm. The Rijksmuseum Gardens, Rijks Shop and Café are also open to visitors without a ticket from 9am to 6pm. For more information, visit www.rijksmuseum.nl/en BELOW: Rembrandt van Rijn (1606-1669), Portraits of Marten Soolmans (right) and Oopjen Coppit (left), 1634 Oil on canvas. Joint purchase by the Kingdom of the Netherlands and the Republic of France, Rijksmuseum Collection/ Musée du Louvre Collection, 2016