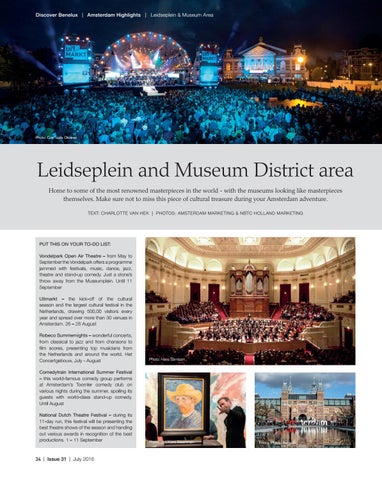 Leidseplein and Museum District area Home to some of the most renowned masterpieces in the world - with the museums looking like masterpieces themselves. Make sure not to miss this piece of cultural treasure during your Amsterdam adventure. TEXT: CHARLOTTE VAN HEK | PHOTOS: AMSTERDAM MARKETING &amp; NBTC HOLLAND MARKETING

PUT THIS ON YOUR TO-DO LIST: Vondelpark Open Air Theatre – from May to September the Vondelpark offers a programme jammed with festivals, music, dance, jazz, theatre and stand-up comedy. Just a stone’s throw away from the Museumplein. Until 11 September Uitmarkt – the kick-off of the cultural season and the largest cultural festival in the Netherlands, drawing 500,00 visitors every year and spread over more than 30 venues in Amsterdam. 26 – 28 August Robeco Summernights – wonderful concerts, from classical to jazz and from chansons to film scores, presenting top musicians from the Netherlands and around the world. Het Concertgebouw, July - August

Comedytrain International Summer Festival – this world-famous comedy group performs at Amsterdam’s Toomler comedy club on various nights during the summer, spoiling its guests with world-class stand-up comedy. Until August National Dutch Theatre Festival – during its 11-day run, this festival will be presenting the best theatre shows of the season and handing out various awards in recognition of the best productions. 1 – 11 September