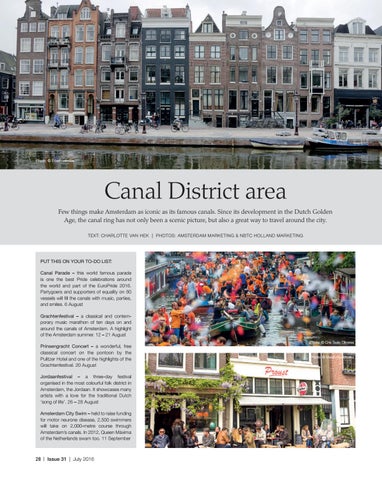 Canal District area Few things make Amsterdam as iconic as its famous canals. Since its development in the Dutch Golden Age, the canal ring has not only been a scenic picture, but also a great way to travel around the city. TEXT: CHARLOTTE VAN HEK | PHOTOS: AMSTERDAM MARKETING &amp; NBTC HOLLAND MARKETING

PUT THIS ON YOUR TO-DO LIST: Canal Parade – this world famous parade is one the best Pride celebrations around the world and part of the EuroPride 2016. Partygoers and supporters of equality on 80 vessels will fill the canals with music, parties, and smiles. 6 August Grachtenfestival – a classical and contemporary music marathon of ten days on and around the canals of Amsterdam. A highlight of the Amsterdam summer. 12 – 21 August Prinsengracht Concert – a wonderful, free classical concert on the pontoon by the Pulitzer Hotel and one of the highlights of the Grachtenfestival. 20 August Jordaanfestival – a three-day festival organised in the most colourful folk district in Amsterdam, the Jordaan. It showcases many artists with a love for the traditional Dutch ‘song of life’. 26 – 28 August Amsterdam City Swim – held to raise funding for motor neurone disease, 2,500 swimmers will take on 2,000-metre course through Amsterdam’s canals. In 2012, Queen Máxima of the Netherlands swam too. 11 September