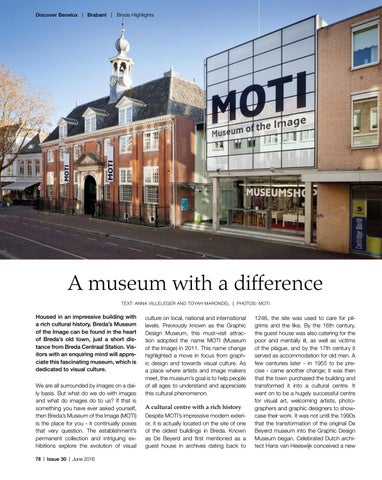 A museum with a difference TEXT: ANNA VILLELEGER AND TOYAH MARONDEL | PHOTOS: MOTI

Housed in an impressive building with a rich cultural history, Breda’s Museum of the Image can be found in the heart of Breda’s old town, just a short distance from Breda Centraal Station. Visitors with an enquiring mind will appreciate this fascinating museum, which is dedicated to visual culture. We are all surrounded by images on a daily basis. But what do we do with images and what do images do to us? If that is something you have ever asked yourself, then Breda’s Museum of the Image (MOTI) is the place for you - it continually poses that very question. The establishment’s permanent collection and intriguing exhibitions explore the evolution of visual 78 | Issue 30 | June 2016

culture on local, national and international levels. Previously known as the Graphic Design Museum, this must-visit attraction adopted the name MOTI (Museum of the Image) in 2011. This name change highlighted a move in focus from graphic design and towards visual culture. As a place where artists and image makers meet, the museum’s goal is to help people of all ages to understand and appreciate this cultural phenomenon.

A cultural centre with a rich history Despite MOTI’s impressive modern exterior, it is actually located on the site of one of the oldest buildings in Breda. Known as De Beyerd and first mentioned as a guest house in archives dating back to

1246, the site was used to care for pilgrims and the like. By the 16th century, the guest house was also catering for the poor and mentally ill, as well as victims of the plague, and by the 17th century it served as accommodation for old men. A few centuries later - in 1955 to be precise - came another change; it was then that the town purchased the building and transformed it into a cultural centre. It went on to be a hugely successful centre for visual art, welcoming artists, photographers and graphic designers to showcase their work. It was not until the 1990s that the transformation of the original De Beyerd museum into the Graphic Design Museum began. Celebrated Dutch architect Hans van Heeswijk conceived a new