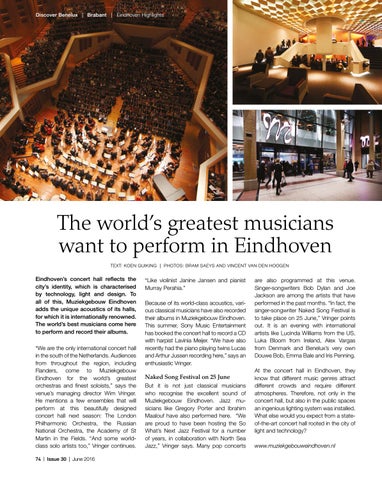 Eindhoven’s concert hall reflects the city’s identity, which is characterised by technology, light and design. To all of this, Muziekgebouw Eindhoven adds the unique acoustics of its halls, for which it is internationally renowned. The world’s best musicians come here to perform and record their albums. “We are the only international concert hall in the south of the Netherlands. Audiences from throughout the region, including Flanders, come to Muziekgebouw Eindhoven for the world’s greatest orchestras and finest soloists,” says the venue’s managing director Wim Vringer. He mentions a few ensembles that will perform at this beautifully designed concert hall next season: The London Philharmonic Orchestra, the Russian National Orchestra, the Academy of St Martin in the Fields. “And some worldclass solo artists too,” Vringer continues. 74 | Issue 30 | June 2016

“Like violinist Janine Jansen and pianist Murray Perahia.” Because of its world-class acoustics, various classical musicians have also recorded their albums in Muziekgebouw Eindhoven. This summer, Sony Music Entertainment has booked the concert hall to record a CD with harpist Lavinia Meijer. “We have also recently had the piano playing twins Lucas and Arthur Jussen recording here,” says an enthusiastic Vringer.

Naked Song Festival on 25 June But it is not just classical musicians who recognise the excellent sound of Muziekgebouw Eindhoven. Jazz musicians like Gregory Porter and Ibrahim Maalouf have also performed here. “We are proud to have been hosting the So What’s Next Jazz Festival for a number of years, in collaboration with North Sea Jazz,” Vringer says. Many pop concerts

are also programmed at this venue. Singer-songwriters Bob Dylan and Joe Jackson are among the artists that have performed in the past months. “In fact, the singer-songwriter Naked Song Festival is to take place on 25 June,” Vringer points out. It is an evening with international artists like Lucinda Williams from the US, Luka Bloom from Ireland, Alex Vargas from Denmark and Benelux’s very own Douwe Bob, Emma Bale and Iris Penning. At the concert hall in Eindhoven, they know that different music genres attract different crowds and require different atmospheres. Therefore, not only in the concert hall, but also in the public spaces an ingenious lighting system was installed. What else would you expect from a stateof-the-art concert hall rooted in the city of light and technology? www.muziekgebouweindhoven.nl