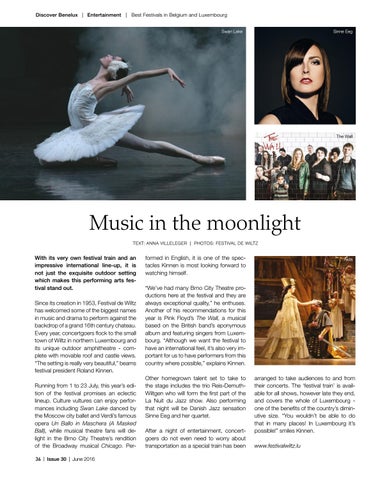 With its very own festival train and an impressive international line-up, it is not just the exquisite outdoor setting which makes this performing arts festival stand out. Since its creation in 1953, Festival de Wiltz has welcomed some of the biggest names in music and drama to perform against the backdrop of a grand 16th century chateau. Every year, concertgoers flock to the small town of Wiltz in northern Luxembourg and its unique outdoor amphitheatre - complete with movable roof and castle views. “The setting is really very beautiful,” beams festival president Roland Kinnen. Running from 1 to 23 July, this year’s edition of the festival promises an eclectic lineup. Culture vultures can enjoy performances including Swan Lake danced by the Moscow city ballet and Verdi’s famous opera Un Ballo in Maschera (A Masked Ball), while musical theatre fans will delight in the Brno City Theatre’s rendition of the Broadway musical Chicago. Per36 | Issue 30 | June 2016

formed in English, it is one of the spectacles Kinnen is most looking forward to watching himself.

“We’ve had many Brno City Theatre productions here at the festival and they are always exceptional quality,” he enthuses. Another of his recommendations for this year is Pink Floyd’s The Wall, a musical based on the British band’s eponymous album and featuring singers from Luxembourg. “Although we want the festival to have an international feel, it’s also very important for us to have performers from this country where possible,” explains Kinnen. Other homegrown talent set to take to the stage includes the trio Reis-DemuthWiltgen who will form the first part of the La Nuit du Jazz show. Also performing that night will be Danish Jazz sensation Sinne Eeg and her quartet. After a night of entertainment, concertgoers do not even need to worry about transportation as a special train has been

arranged to take audiences to and from their concerts. The ‘festival train’ is available for all shows, however late they end, and covers the whole of Luxembourg one of the benefits of the country’s diminutive size. “You wouldn’t be able to do that in many places! In Luxembourg it’s possible!” smiles Kinnen. www.festivalwiltz.lu