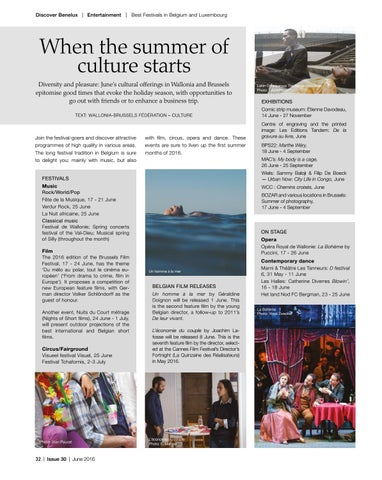 When the summer of culture starts Diversity and pleasure: June’s cultural offerings in Wallonia and Brussels epitomise good times that evoke the holiday season, with opportunities to go out with friends or to enhance a business trip. TEXT: WALLONIA-BRUSSELS FÉDÉRATION – CULTURE

Join the festival-goers and discover attractive programmes of high quality in various areas. The long festival tradition in Belgium is sure to delight you; mainly with music, but also

with film, circus, opera and dance. These events are sure to liven up the first summer months of 2016.

BELGIAN FILM RELEASES Un homme à la mer by Géraldine Doignon will be released 1 June. This is the second feature film by the young Belgian director, a follow-up to 2011’s De leur vivant. L’économie du couple by Joachim Lafosse will be released 8 June. This is the seventh feature film by the director, selected at the Cannes Film Festival’s Director’s Fortnight (La Quinzaine des Réalisateurs) in May 2016.