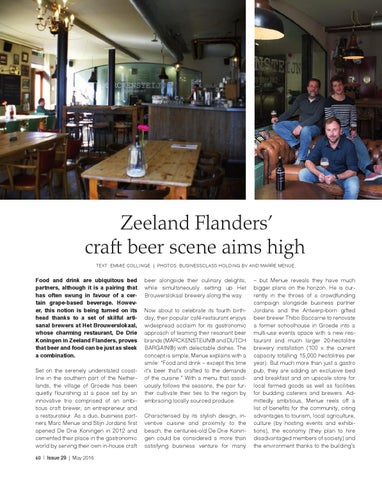 Food and drink are ubiquitous bed partners, although it is a pairing that has often swung in favour of a certain grape-based beverage. However, this notion is being turned on its head thanks to a set of skilful artisanal brewers at Het Brouwerslokaal, whose charming restaurant, De Drie Koningen in Zeeland Flanders, proves that beer and food can be just as sleek a combination. Set on the serenely understated coastline in the southern part of the Netherlands, the village of Groede has been quietly flourishing at a pace set by an innovative trio comprised of an ambitious craft brewer, an entrepreneur and a restaurateur. As a duo, business partners Marc Menue and Stijn Jordans first opened De Drie Koningen in 2012 and cemented their place in the gastronomic world by serving their own in-house craft 60 | Issue 29 | May 2016

beer alongside their culinary delights, while simultaneously setting up Het Brouwerslokaal brewery along the way. Now about to celebrate its fourth birthday, their popular café-restaurant enjoys widespread acclaim for its gastronomic approach of teaming their resonant beer brands (MARCKENSTEIJN® and DUTCH BARGAIN®) with delectable dishes. The concept is simple, Menue explains with a smile: “Food and drink – except this time it’s beer that’s crafted to the demands of the cuisine.” With a menu that assiduously follows the seasons, the pair further cultivate their ties to the region by embracing locally sourced produce. Characterised by its stylish design, inventive cuisine and proximity to the beach, the centuries-old De Drie Koningen could be considered a more than satisfying business venture for many

– but Menue reveals they have much bigger plans on the horizon. He is currently in the throes of a crowdfunding campaign alongside business partner Jordans and the Antwerp-born gifted beer brewer Thibo Baccarne to renovate a former schoolhouse in Groede into a multi-use events space with a new restaurant and much larger 20-hectolitre brewery installation (100 x the current capacity totalling 15,000 hectolitres per year). But much more than just a gastro pub, they are adding an exclusive bed and breakfast and an upscale store for local farmed goods as well as facilities for budding caterers and brewers. Admittedly ambitious, Menue reels off a list of benefits for the community, citing advantages to tourism, local agriculture, culture (by hosting events and exhibitions), the economy (they plan to hire disadvantaged members of society) and the environment thanks to the building’s