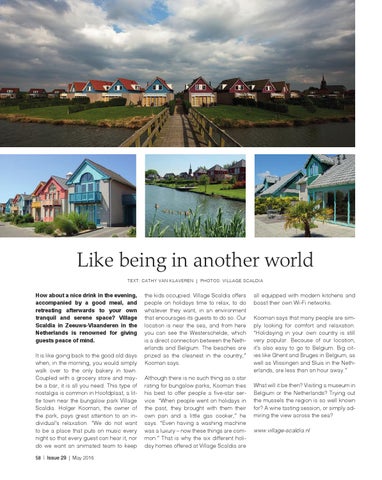 Like being in another world TEXT: CATHY VAN KLAVEREN | PHOTOS: VILLAGE SCALDIA

How about a nice drink in the evening, accompanied by a good meal, and retreating afterwards to your own tranquil and serene space? Village Scaldia in Zeeuws-Vlaanderen in the Netherlands is renowned for giving guests peace of mind. It is like going back to the good old days when, in the morning, you would simply walk over to the only bakery in town. Coupled with a grocery store and maybe a bar, it is all you need. This type of nostalgia is common in Hoofdplaat, a little town near the bungalow park Village Scaldia. Holger Kooman, the owner of the park, pays great attention to an individual’s relaxation. “We do not want to be a place that puts on music every night so that every guest can hear it, nor do we want an animated team to keep 58 | Issue 29 | May 2016

the kids occupied. Village Scaldia offers people on holidays time to relax, to do whatever they want, in an environment that encourages its guests to do so. Our location is near the sea, and from here you can see the Westerschelde, which is a direct connection between the Netherlands and Belgium. The beaches are prized as the cleanest in the country,” Kooman says. Although there is no such thing as a star rating for bungalow parks, Kooman tries his best to offer people a five-star service. “When people went on holidays in the past, they brought with them their own pan and a little gas cooker,” he says. “Even having a washing machine was a luxury – now these things are common.” That is why the six different holiday homes offered at Village Scaldia are

all equipped with modern kitchens and boast their own Wi-Fi networks. Kooman says that many people are simply looking for comfort and relaxation. “Holidaying in your own country is still very popular. Because of our location, it’s also easy to go to Belgium. Big cities like Ghent and Bruges in Belgium, as well as Vlissingen and Sluis in the Netherlands, are less than an hour away.” What will it be then? Visiting a museum in Belgium or the Netherlands? Trying out the mussels the region is so well known for? A wine tasting session, or simply admiring the view across the sea? www.village-scaldia.nl