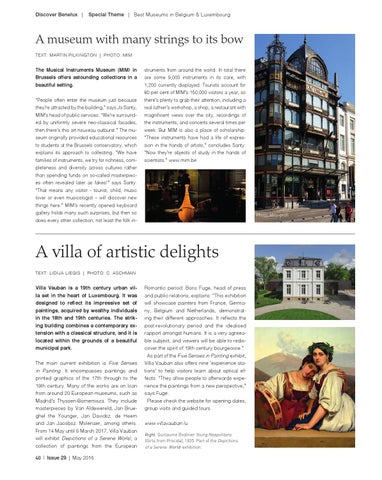 A museum with many strings to its bow TEXT: MARTIN PILKINGTON | PHOTO: MIM

The Musical Instruments Museum (MIM) in Brussels offers astounding collections in a beautiful setting. “People often enter the museum just because they’re attracted by the building,” says Jo Santy, MIM’s head of public services: “We’re surrounded by uniformly severe neo-classical facades, then there’s this art nouveau outburst.” The museum originally provided educational resources to students at the Brussels conservatory, which explains its approach to collecting. “We have families of instruments, we try for richness, completeness and diversity across cultures rather than spending funds on so-called masterpieces often revealed later as fakes!” says Santy: “That means any visitor - tourist, child, music lover or even musicologist – will discover new things here.” MIM’s recently opened keyboard gallery holds many such surprises, but then so does every other collection, not least the folk in-

struments from around the world. In total there are some 9,000 instruments in its care, with 1,200 currently displayed. Tourists account for 80 per cent of MIM’s 150,000 visitors a year, so there’s plenty to grab their attention, including a real luthier’s workshop, a shop, a restaurant with magnificent views over the city, recordings of the instruments, and concerts several times per week. But MIM is also a place of scholarship: “These instruments have had a life of expression in the hands of artists,” concludes Santy. “Now they’re objects of study in the hands of scientists.” www.mim.be

Villa Vauban is a 19th century urban villa set in the heart of Luxembourg. It was designed to reflect its impressive set of paintings, acquired by wealthy individuals in the 18th and 19th centuries. The striking building combines a contemporary extension with a classical structure, and it is located within the grounds of a beautiful municipal park. The main current exhibition is Five Senses in Painting. It encompasses paintings and printed graphics of the 17th through to the 19th century. Many of the works are on loan from around 20 European museums, such as Madrid’s Thyssen-Bornemisza. They include masterpieces by Van Aldewereld, Jan Brueghel the Younger, Jan Davidsz. de Heem and Jan Jacobsz. Molenaer, among others. From 14 May until 5 March 2017, Villa Vauban will exhibit Depictions of a Serene World, a collection of paintings from the European 40 | Issue 29 | May 2016

Romantic period. Boris Fuge, head of press and public relations, explains: “This exhibition will showcase painters from France, Germany, Belgium and Netherlands, demonstrating their different approaches. It reflects the post-revolutionary period and the idealised rapport amongst humans. It is a very agreeable subject, and viewers will be able to rediscover the spirit of 19th century bourgeoisie.” As part of the Five Senses in Painting exhibit, Villa Vauban also offers nine ‘experience stations’ to help visitors learn about optical effects. “They allow people to afterwards experience the paintings from a new perspective,” says Fuge. Please check the website for opening dates, group visits and guided tours. www.villavauban.lu Right: Guillaume Bodinier Young Neapolitans (Girls from Procida), 1835. Part of the Depictions of a Serene World exhibition.