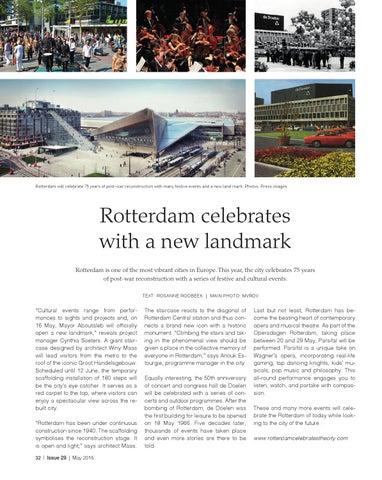 Rotterdam will celebrate 75 years of post-war reconstruction with many festive events and a new land mark. Photos: Press images

Rotterdam celebrates with a new landmark Rotterdam is one of the most vibrant cities in Europe. This year, the city celebrates 75 years of post-war reconstruction with a series of festive and cultural events. TEXT: ROSANNE ROOBEEK | MAIN PHOTO: MVRDV

“Cultural events range from performances to sights and projects and, on 16 May, Mayor Aboutaleb will officially open a new landmark,” reveals project manager Cynthia Soeters. A giant staircase designed by architect Winy Maas will lead visitors from the metro to the roof of the iconic Groot Handelsgebouw. Scheduled until 12 June, the temporary scaffolding installation of 180 steps will be the city’s eye catcher. It serves as a red carpet to the top, where visitors can enjoy a spectacular view across the rebuilt city. “Rotterdam has been under continuous construction since 1940. The scaffolding symbolises the reconstruction stage. It is open and light,” says architect Maas. 32 | Issue 29 | May 2016

The staircase reacts to the diagonal of Rotterdam Central station and thus connects a brand new icon with a historic monument. “Climbing the stairs and taking in the phenomenal view should be given a place in the collective memory of everyone in Rotterdam,” says Anouk Estourgie, programme manager in the city. Equally interesting, the 50th anniversary of concert and congress hall de Doelen will be celebrated with a series of concerts and outdoor programmes. After the bombing of Rotterdam, de Doelen was the first building for leisure to be opened on 18 May 1966. Five decades later, thousands of events have taken place and even more stories are there to be told.

Last but not least, Rotterdam has become the beating heart of contemporary opera and musical theatre. As part of the Operadagen Rotterdam, taking place between 20 and 29 May, Parsifal will be performed. Parsifal is a unique take on Wagner’s opera, incorporating real-life gaming, tap dancing knights, kids’ musicals, pop music and philosophy. This all-round performance engages you to listen, watch, and partake with compassion. These and many more events will celebrate the Rotterdam of today while looking to the city of the future. www.rotterdamcelebratesthecity.com