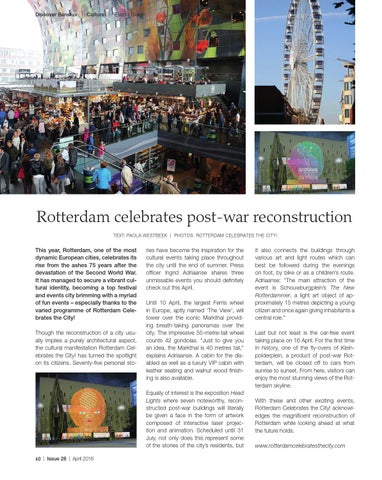 This year, Rotterdam, one of the most dynamic European cities, celebrates its rise from the ashes 75 years after the devastation of the Second World War. It has managed to secure a vibrant cultural identity, becoming a top festival and events city brimming with a myriad of fun events – especially thanks to the varied programme of Rotterdam Celebrates the City! Though the reconstruction of a city usually implies a purely architectural aspect, the cultural manifestation Rotterdam Celebrates the City! has turned the spotlight on its citizens. Seventy-five personal sto-

ries have become the inspiration for the cultural events taking place throughout the city until the end of summer. Press officer Ingrid Adriaanse shares three unmissable events you should definitely check out this April. Until 10 April, the largest Ferris wheel in Europe, aptly named ‘The View’, will tower over the iconic Markthal providing breath-taking panoramas over the city. The impressive 55-metre-tall wheel counts 42 gondolas. “Just to give you an idea, the Markthal is 40 metres tall,” explains Adriaanse. A cabin for the disabled as well as a luxury VIP cabin with leather seating and walnut wood finishing is also available. Equally of interest is the exposition Head Lights where seven noteworthy, reconstructed post-war buildings will literally be given a face in the form of artwork composed of interactive laser projection and animation. Scheduled until 31 July, not only does this represent some of the stories of the city’s residents, but

it also connects the buildings through various art and light routes which can best be followed during the evenings on foot, by bike or as a children’s route. Adriaanse: “The main attraction of the event is Schouwburgplein’s The New Rotterdammer, a light art object of approximately 15 metres depicting a young citizen and once again giving inhabitants a central role.” Last but not least is the car-free event taking place on 16 April. For the first time in history, one of the fly-overs of Kleinpolderplein, a product of post-war Rotterdam, will be closed off to cars from sunrise to sunset. From here, visitors can enjoy the most stunning views of the Rotterdam skyline. With these and other exciting events, Rotterdam Celebrates the City! acknowledges the magnificent reconstruction of Rotterdam while looking ahead at what the future holds. www.rotterdamcelebratesthecity.com