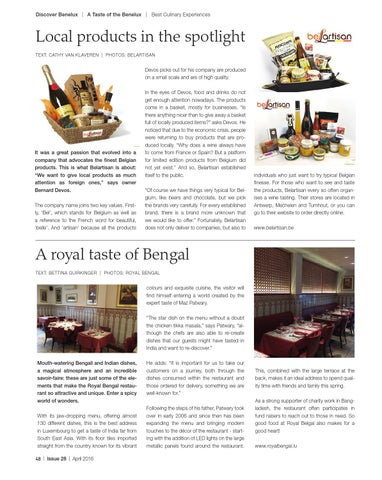 Discover Benelux | A Taste of the Benelux | Best Culinary Experiences

Devos picks out for his company are produced on a small scale and are of high quality.

It was a great passion that evolved into a company that advocates the finest Belgian products. This is what Belartisan is about: “We want to give local products as much attention as foreign ones,” says owner Bernard Devos. The company name joins two key values. Firstly, ‘Bel’, which stands for Belgium as well as a reference to the French word for beautiful, ‘belle’. And ‘artisan’ because all the products

In the eyes of Devos, food and drinks do not get enough attention nowadays. The products come in a basket, mostly for businesses. “Is there anything nicer than to give away a basket full of locally produced items?” asks Devos. He noticed that due to the economic crisis, people were returning to buy products that are produced locally. “Why does a wine always have to come from France or Spain? But a platform for limited edition products from Belgium did not yet exist.” And so, Belartisan established itself to the public. “Of course we have things very typical for Belgium, like beers and chocolate, but we pick the brands very carefully. For every established brand, there is a brand more unknown that we would like to offer.” Fortunately, Belartisan does not only deliver to companies, but also to

individuals who just want to try typical Belgian finesse. For those who want to see and taste the products, Belartisan every so often organises a wine tasting. Their stores are located in Antwerp, Mechelen and Turnhout, or you can go to their website to order directly online. www.belartisan.be

colours and exquisite cuisine, the visitor will find himself entering a world created by the expert taste of Maz Patwary. “The star dish on the menu without a doubt the chicken tikka masala,” says Patwary, “although the chefs are also able to re-create dishes that our guests might have tasted in India and want to re-discover.” Mouth-watering Bengali and Indian dishes, a magical atmosphere and an incredible savoir-faire: these are just some of the elements that make the Royal Bengal restaurant so attractive and unique. Enter a spicy world of wonders. With its jaw-dropping menu, offering almost 130 different dishes, this is the best address in Luxembourg to get a taste of India far from South East Asia. With its floor tiles imported straight from the country known for its vibrant 48 | Issue 28 | April 2016

He adds: “It is important for us to take our customers on a journey, both through the dishes consumed within the restaurant and those ordered for delivery, something we are well-known for.” Following the steps of his father, Patwary took over in early 2006 and since then has been expanding the menu and bringing modern touches to the décor of the restaurant - starting with the addition of LED lights on the large metallic panels found around the restaurant.

This, combined with the large terrace at the back, makes it an ideal address to spend quality time with friends and family this spring. As a strong supporter of charity work in Bangladesh, the restaurant often participates in fund raisers to reach out to those in need. So good food at Royal Belgal also makes for a good heart! www.royalbengal.lu