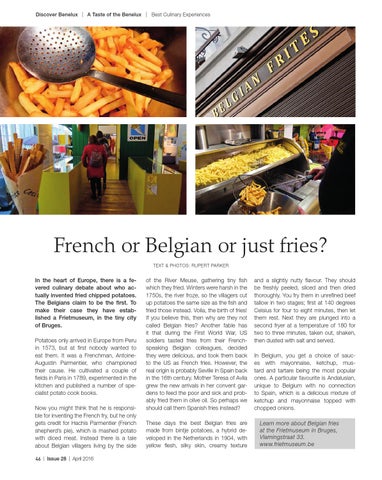 Discover Benelux | A Taste of the Benelux | Best Culinary Experiences

In the heart of Europe, there is a fevered culinary debate about who actually invented fried chipped potatoes. The Belgians claim to be the first. To make their case they have established a Frietmuseum, in the tiny city of Bruges. Potatoes only arrived in Europe from Peru in 1573, but at first nobody wanted to eat them. It was a Frenchman, AntoineAugustin Parmentier, who championed their cause. He cultivated a couple of fields in Paris in 1789, experimented in the kitchen and published a number of specialist potato cook books. Now you might think that he is responsible for inventing the French fry, but he only gets credit for Hachis Parmentier (French shepherdâ&amp;#x20AC;&amp;#x2122;s pie), which is mashed potato with diced meat. Instead there is a tale about Belgian villagers living by the side 46 | Issue 28 | April 2016

of the River Meuse, gathering tiny fish which they fried. Winters were harsh in the 1750s, the river froze, so the villagers cut up potatoes the same size as the fish and fried those instead. Voila, the birth of fries! If you believe this, then why are they not called Belgian fries? Another fable has it that during the First World War, US soldiers tasted fries from their Frenchspeaking Belgian colleagues, decided they were delicious, and took them back to the US as French fries. However, the real origin is probably Seville in Spain back in the 16th century. Mother Teresa of Avila grew the new arrivals in her convent gardens to feed the poor and sick and probably fried them in olive oil. So perhaps we should call them Spanish fries instead? These days the best Belgian fries are made from bintje potatoes, a hybrid developed in the Netherlands in 1904, with yellow flesh, silky skin, creamy texture

and a slightly nutty flavour. They should be freshly peeled, sliced and then dried thoroughly. You fry them in unrefined beef tallow in two stages; first at 140 degrees Celsius for four to eight minutes, then let them rest. Next they are plunged into a second fryer at a temperature of 180 for two to three minutes, taken out, shaken, then dusted with salt and served. In Belgium, you get a choice of sauces with mayonnaise, ketchup, mustard and tartare being the most popular ones. A particular favourite is Andalusian, unique to Belgium with no connection to Spain, which is a delicious mixture of ketchup and mayonnaise topped with chopped onions. Learn more about Belgian fries at the Frietmuseum in Bruges, Vlamingstraat 33. www.frietmuseum.be