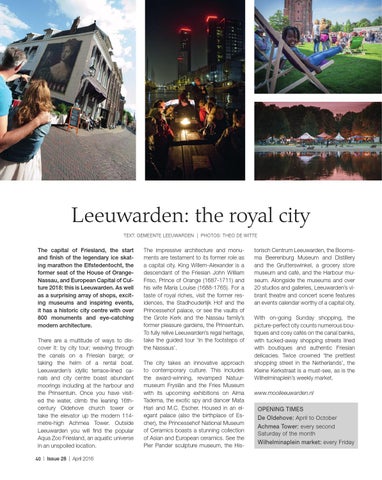 The capital of Friesland, the start and finish of the legendary ice skating marathon the Elfstedentocht, the former seat of the House of OrangeNassau, and European Capital of Culture 2018: this is Leeuwarden. As well as a surprising array of shops, exciting museums and inspiring events, it has a historic city centre with over 800 monuments and eye-catching modern architecture. There are a multitude of ways to discover it: by city tour; weaving through the canals on a Friesian barge; or taking the helm of a rental boat. Leeuwarden’s idyllic terrace-lined canals and city centre boast abundant moorings including at the harbour and the Prinsentuin. Once you have visited the water, climb the leaning 16thcentury Oldehove church tower or take the elevator up the modern 114metre-high Achmea Tower. Outside Leeuwarden you will find the popular Aqua Zoo Friesland, an aquatic universe in an unspoiled location. 40 | Issue 28 | April 2016

The impressive architecture and monuments are testament to its former role as a capital city. King Willem-Alexander is a descendant of the Friesian John William Friso, Prince of Orange (1687-1711) and his wife Maria Louise (1688-1765). For a taste of royal riches, visit the former residences, the Stadhouderlijk Hof and the Princessehof palace, or see the vaults of the Grote Kerk and the Nassau family’s former pleasure gardens, the Prinsentuin. To fully relive Leeuwarden’s regal heritage, take the guided tour ‘In the footsteps of the Nassaus’. The city takes an innovative approach to contemporary culture. This includes the award-winning, revamped Natuurmuseum Fryslân and the Fries Museum with its upcoming exhibitions on Alma Tadema, the exotic spy and dancer Mata Hari and M.C. Escher. Housed in an elegant palace (also the birthplace of Escher), the Princessehof National Museum of Ceramics boasts a stunning collection of Asian and European ceramics. See the Pier Pander sculpture museum, the His-

torisch Centrum Leeuwarden, the Boomsma Beerenburg Museum and Distillery and the Grutterswinkel, a grocery store museum and café, and the Harbour museum. Alongside the museums and over 20 studios and galleries, Leeuwarden’s vibrant theatre and concert scene features an events calendar worthy of a capital city. With on-going Sunday shopping, the picture-perfect city counts numerous boutiques and cosy cafés on the canal banks, with tucked-away shopping streets lined with boutiques and authentic Friesian delicacies. Twice crowned ‘the prettiest shopping street in the Netherlands’, the Kleine Kerkstraat is a must-see, as is the Wilhelminaplein’s weekly market. www.mooileeuwarden.nl OPENING TIMES De Oldehove: April to October Achmea Tower: every second Saturday of the month Wilhelminaplein market: every Friday