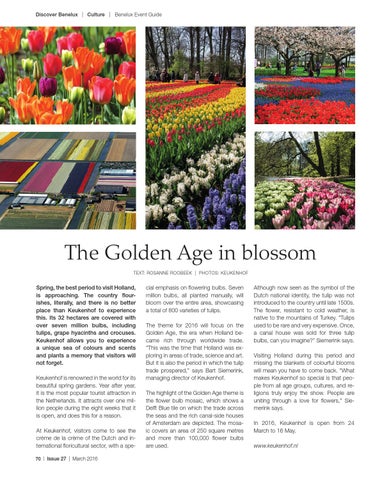 Spring, the best period to visit Holland, is approaching. The country flourishes, literally, and there is no better place than Keukenhof to experience this. Its 32 hectares are covered with over seven million bulbs, including tulips, grape hyacinths and crocuses. Keukenhof allows you to experience a unique sea of colours and scents and plants a memory that visitors will not forget. Keukenhof is renowned in the world for its beautiful spring gardens. Year after year, it is the most popular tourist attraction in the Netherlands. It attracts over one million people during the eight weeks that it is open, and does this for a reason. At Keukenhof, visitors come to see the crème de la crème of the Dutch and international floricultural sector, with a spe70 | Issue 27 | March 2016

cial emphasis on flowering bulbs. Seven million bulbs, all planted manually, will bloom over the entire area, showcasing a total of 800 varieties of tulips. The theme for 2016 will focus on the Golden Age, the era when Holland became rich through worldwide trade. “This was the time that Holland was exploring in areas of trade, science and art. But it is also the period in which the tulip trade prospered,” says Bart Siemerink, managing director of Keukenhof. The highlight of the Golden Age theme is the flower bulb mosaic, which shows a Delft Blue tile on which the trade across the seas and the rich canal-side houses of Amsterdam are depicted. The mosaic covers an area of 250 square metres and more than 100,000 flower bulbs are used.

Although now seen as the symbol of the Dutch national identity, the tulip was not introduced to the country until late 1500s. The flower, resistant to cold weather, is native to the mountains of Turkey. “Tulips used to be rare and very expensive. Once, a canal house was sold for three tulip bulbs, can you imagine?” Siemerink says. Visiting Holland during this period and missing the blankets of colourful blooms will mean you have to come back. “What makes Keukenhof so special is that people from all age groups, cultures, and religions truly enjoy the show. People are uniting through a love for flowers,” Siemerink says. In 2016, Keukenhof is open from 24 March to 16 May. www.keukenhof.nl