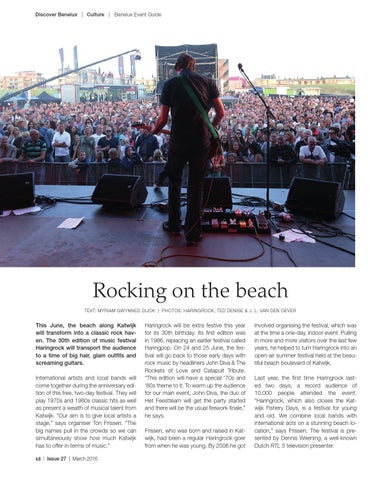 This June, the beach along Katwijk will transform into a classic rock haven. The 30th edition of music festival Haringrock will transport the audience to a time of big hair, glam outfits and screaming guitars. International artists and local bands will come together during the anniversary edition of this free, two-day festival. They will play 1970s and 1980s classic hits as well as present a wealth of musical talent from Katwijk. “Our aim is to give local artists a stage,” says organiser Ton Frissen. “The big names pull in the crowds so we can simultaneously show how much Katwijk has to offer in terms of music.” 68 | Issue 27 | March 2016

Haringrock will be extra festive this year for its 30th birthday. Its first edition was in 1986, replacing an earlier festival called Haringpop. On 24 and 25 June, the festival will go back to those early days with rock music by headliners John Diva &amp; The Rockets of Love and Catapult Tribute. “This edition will have a special ‘70s and ‘80s theme to it. To warm up the audience for our main event, John Diva, the duo of Het Feestteam will get the party started and there will be the usual firework finale,” he says. Frissen, who was born and raised in Katwijk, had been a regular Haringrock-goer from when he was young. By 2006 he got

involved organising the festival, which was at the time a one-day, indoor event. Pulling in more and more visitors over the last few years, he helped to turn Haringrock into an open-air summer festival held at the beautiful beach boulevard of Katwijk. Last year, the first time Haringrock lasted two days, a record audience of 10,000 people attended the event. “Haringrock, which also closes the Katwijk Fishery Days, is a festival for young and old. We combine local bands with international acts on a stunning beach location,” says Frissen. The festival is presented by Dennis Weening, a well-known Dutch RTL 5 television presenter.