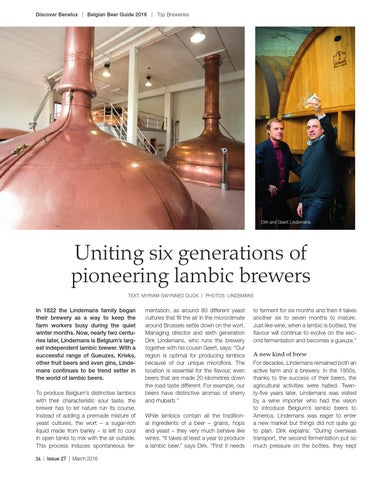 In 1822 the Lindemans family began their brewery as a way to keep the farm workers busy during the quiet winter months. Now, nearly two centuries later, Lindemans is Belgium’s largest independent lambic brewer. With a successful range of Gueuzes, Krieks, other fruit beers and even gins, Lindemans continues to be trend setter in the world of lambic beers. To produce Belgium’s distinctive lambics with their characteristic sour taste, the brewer has to let nature run its course. Instead of adding a premade mixture of yeast cultures, the wort – a sugar-rich liquid made from barley – is left to cool in open tanks to mix with the air outside. This process induces spontaneous fer36 | Issue 27 | March 2016

mentation, as around 80 different yeast cultures that fill the air in the microclimate around Brussels settle down on the wort. Managing director and sixth generation Dirk Lindemans, who runs the brewery together with his cousin Geert, says: “Our region is optimal for producing lambics because of our unique microflora. The location is essential for the flavour, even beers that are made 20 kilometres down the road taste different. For example, our beers have distinctive aromas of sherry and rhubarb.” While lambics contain all the traditional ingredients of a beer – grains, hops and yeast – they very much behave like wines. “It takes at least a year to produce a lambic beer,” says Dirk. “First it needs

to ferment for six months and then it takes another six to seven months to mature. Just like wine, when a lambic is bottled, the flavour will continue to evolve on the second fermentation and becomes a gueuze.”

A new kind of brew For decades, Lindemans remained both an active farm and a brewery. In the 1950s, thanks to the success of their beers, the agricultural activities were halted. Twenty-five years later, Lindemans was visited by a wine importer who had the vision to introduce Belgium’s lambic beers to America. Lindemans was eager to enter a new market but things did not quite go to plan. Dirk explains: “During overseas transport, the second fermentation put so much pressure on the bottles, they kept