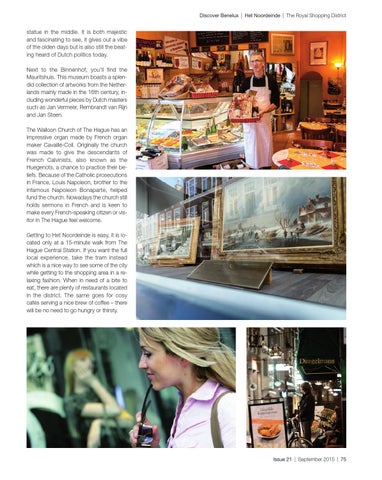 statue in the middle. It is both majestic and fascinating to see, it gives out a vibe of the olden days but is also still the beating heard of Dutch politics today. Next to the Binnenhof, you’ll find the Mauritshuis. This museum boasts a splendid collection of artworks from the Netherlands mainly made in the 16th century, including wonderful pieces by Dutch masters such as Jan Vermeer, Rembrandt van Rijn and Jan Steen. The Walloon Church of The Hague has an impressive organ made by French organ maker Cavaillé-Coll. Originally the church was made to give the descendants of French Calvinists, also known as the Huegenots, a chance to practice their beliefs. Because of the Catholic prosecutions in France, Louis Napoleon, brother to the infamous Napoleon Bonaparte, helped fund the church. Nowadays the church still holds sermons in French and is keen to make every French-speaking citizen or visitor in The Hague feel welcome. Getting to Het Noordeinde is easy, it is located only at a 15-minute walk from The Hague Central Station. If you want the full local experience, take the tram instead which is a nice way to see some of the city while getting to the shopping area in a relaxing fashion. When in need of a bite to eat, there are plenty of restaurants located in the district. The same goes for cosy cafés serving a nice brew of coffee – there will be no need to go hungry or thirsty.