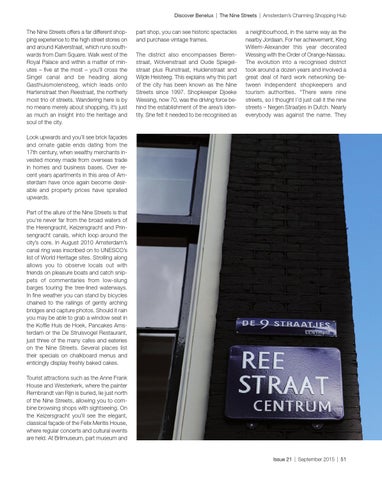 The Nine Streets offers a far different shopping experience to the high street stores on and around Kalverstraat, which runs southwards from Dam Square. Walk west of the Royal Palace and within a matter of minutes – five at the most – you’ll cross the Singel canal and be heading along Gasthuismolensteeg, which leads onto Hartenstraat then Reestraat, the northerly most trio of streets. Wandering here is by no means merely about shopping, it’s just as much an insight into the heritage and soul of the city.

part shop, you can see historic spectacles and purchase vintage frames. The district also encompasses Berenstraat, Wolvenstraat and Oude Spiegelstraat plus Runstraat, Huidenstraat and Wijde Heisteeg. This explains why this part of the city has been known as the Nine Streets since 1997. Shopkeeper Djoeke Wessing, now 70, was the driving force behind the establishment of the area’s identity. She felt it needed to be recognised as

a neighbourhood, in the same way as the nearby Jordaan. For her achievement, King Willem-Alexander this year decorated Wessing with the Order of Orange-Nassau. The evolution into a recognised district took around a dozen years and involved a great deal of hard work networking between independent shopkeepers and tourism authorities. “There were nine streets, so I thought I’d just call it the nine streets – Negen Straatjes in Dutch. Nearly everybody was against the name. They

Look upwards and you’ll see brick façades and ornate gable ends dating from the 17th century, when wealthy merchants invested money made from overseas trade in homes and business bases. Over recent years apartments in this area of Amsterdam have once again become desirable and property prices have spiralled upwards. Part of the allure of the Nine Streets is that you’re never far from the broad waters of the Herengracht, Keizersgracht and Prinsengracht canals, which loop around the city’s core. In August 2010 Amsterdam’s canal ring was inscribed on to UNESCO’s list of World Heritage sites. Strolling along allows you to observe locals out with friends on pleasure boats and catch snippets of commentaries from low-slung barges touring the tree-lined waterways. In fine weather you can stand by bicycles chained to the railings of gently arching bridges and capture photos. Should it rain you may be able to grab a window seat in the Koffie Huis de Hoek, Pancakes Amsterdam or the De Struisvogel Restaurant, just three of the many cafes and eateries on the Nine Streets. Several places list their specials on chalkboard menus and enticingly display freshly baked cakes. Tourist attractions such as the Anne Frank House and Westerkerk, where the painter Rembrandt van Rijn is buried, lie just north of the Nine Streets, allowing you to combine browsing shops with sightseeing. On the Keizersgracht you’ll see the elegant, classical façade of the Felix Meritis House, where regular concerts and cultural events are held. At Brilmuseum, part museum and