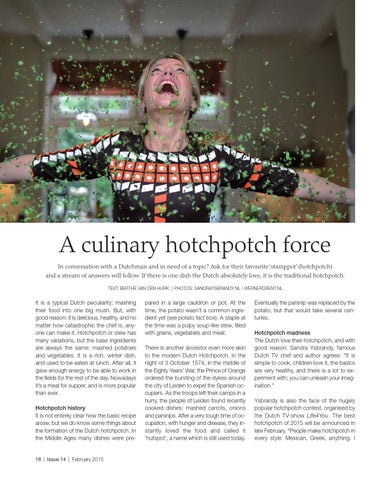 A culinary hotchpotch force In conversation with a Dutchman and in need of a topic? Ask for their favourite ‘stamppot’ (hotchpotch) and a stream of answers will follow. If there is one dish the Dutch absolutely love, it is the traditional hotchpotch. TEXT: BERTHE VAN DEN HURK  |  PHOTOS: SANDRAYSBRANDY.NL / WERNERDRENT.NL

It  is  a  typical  Dutch  peculiarity:  mashing their  food  into  one  big  mush.  But,  with good reason: it is delicious, healthy, and no matter how catastrophic the chef is, anyone can make it. Hotchpotch or stew has many variations, but the base ingredients are  always  the  same:  mashed  potatoes and  vegetables.  It  is  a  rich,  winter  dish, and used to be eaten at lunch. After all, it gave enough energy to be able to work in the fields for the rest of the day. Nowadays it’s a meal for supper, and is more popular than ever. Hotchpotch history It is not entirely clear how the basic recipe arose, but we do know some things about the formation of the Dutch hotchpotch. In the  Middle  Ages  many  dishes  were  pre-

pared  in  a  large  cauldron  or  pot.  At  the time, the potato wasn’t a common ingredient yet (see potato fact box). A staple at the time was a pulpy soup-like stew, filled with grains, vegetables and meat. There is another ancestor even more akin to the modern Dutch Hotchpotch. In the night of 3 October 1574, in the middle of the Eighty Years’ War, the Prince of Orange ordered the bursting of the dykes around the city of Leiden to expel the Spanish occupiers. As the troops left their camps in a hurry, the people of Leiden found recently cooked  dishes:  mashed  carrots,  onions and parsnips. After a very tough time of occupation, with hunger and disease, they instantly  loved  the  food  and  called  it ‘hutspot’, a name which is still used today.

Eventually the parsnip was replaced by the potato,  but  that  would  take  several  centuries.  Hotchpotch madness The Dutch love their hotchpotch, and with good  reason.  Sandra  Ysbrandy,  famous Dutch  TV  chef  and  author  agrees:  “It  is simple to cook, children love it, the basics are very healthy, and there is a lot to experiment with; you can unleash your imagination.” Ysbrandy  is  also  the  face  of  the  hugely popular hotchpotch contest, organised by the  Dutch  TV-show  Life4You.  The  best hotchpotch of 2015 will be announced in late February. “People make hotchpotch in every  style:  Mexican,  Greek,  anything.  I