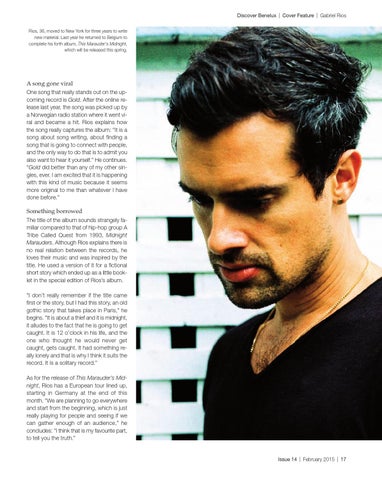 Discover Benelux |  Cover Feature |  Gabriel Rios Rios, 36, moved to New York for three years to write new material. Last year he returned to Belgium to complete his forth album, This Marauder's Midnight, which will be released this spring.

A song gone viral One song that really stands out on the upcoming record is Gold. After the online release last year, the song was picked up by a Norwegian radio station where it went viral  and  became  a  hit.  Rios  explains  how the song really captures the album: “It is a song about song writing, about finding a song that is going to connect with people, and the only way to do that is to admit you also want to hear it yourself.” He continues. “Gold did better than any of my other singles, ever. I am excited that it is happening with this kind of music because it seems more original to me than whatever I have done before.”

Something borrowed The title of the album sounds strangely familiar compared to that of hip-hop group A Tribe  Called  Quest  from  1993,  Midnight Marauders. Although Rios explains there is no  real  relation  between  the  records,  he loves their music and was inspired by the title. He used a version of it for a fictional short story which ended up as a little booklet in the special edition of Rios’s album. “I  don’t  really  remember  if  the  title  came first or the story, but I had this story, an old gothic story that takes place in Paris,” he begins. “It is about a thief and it is midnight, it alludes to the fact that he is going to get caught. It is 12 o’clock in his life, and the one  who  thought  he  would  never  get caught, gets caught. It had something really lonely and that is why I think it suits the record. It is a solitary record.” As for the release of This Marauder’s Midnight, Rios has a European tour lined up, starting  in  Germany  at  the  end  of  this month. “We are planning to go everywhere and start from the beginning, which is just really playing for people and seeing if we can  gather  enough  of  an  audience,”  he concludes: “I think that is my favourite part, to tell you the truth.”