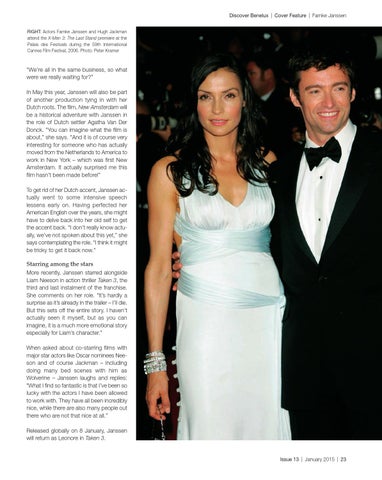 “We’re all in the same business, so what were we really waiting for?” In May this year, Janssen will also be part of another production tying in with her Dutch roots. The film, New Amsterdam will be a historical adventure with Janssen in the role of Dutch settler Agatha Van Der Donck. “You can imagine what the film is about,” she says. “And it is of course very interesting for someone who has actually moved from the Netherlands to America to work in New York – which was first New Amsterdam. It actually surprised me this film hasn’t been made before!” To get rid of her Dutch accent, Janssen actually went to some intensive speech lessens early on. Having perfected her American English over the years, she might have to delve back into her old self to get the accent back. “I don’t really know actually, we’ve not spoken about this yet,” she says contemplating the role. “I think it might be tricky to get it back now.”

Starring among the stars More recently, Janssen starred alongside Liam Neeson in action thriller Taken 3, the third and last instalment of the franchise. She comments on her role. “It’s hardly a surprise as it’s already in the trailer – I’ll die. But this sets off the entire story. I haven’t actually seen it myself, but as you can imagine, it is a much more emotional story especially for Liam’s character.” When asked about co-starring films with major star actors like Oscar nominees Neeson and of course Jackman – including doing many bed scenes with him as Wolverine – Janssen laughs and replies: “What I find so fantastic is that I’ve been so lucky with the actors I have been allowed to work with. They have all been incredibly nice, while there are also many people out there who are not that nice at all.” Released globally on 8 January, Janssen will return as Leonore in Taken 3.