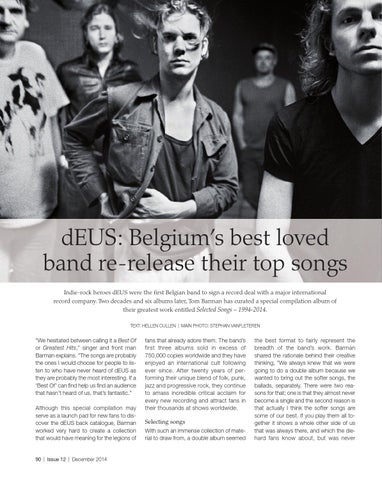 “We hesitated between calling it a Best Of or  Greatest Hits,”  singer  and  front  man Barman explains. “The songs are probably the ones I would choose for people to listen to who have never heard of dEUS as they are probably the most interesting. If a ‘Best Of’ can find help us find an audience that hasn’t heard of us, that’s fantastic.” Although  this  special  compilation  may serve as a launch pad for new fans to discover the dEUS back catalogue, Barman worked  very  hard  to  create  a  collection that would have meaning for the legions of

fans that already adore them. The band’s first  three  albums  sold  in  excess  of 750,000 copies worldwide and they have enjoyed  an  international  cult  following ever  since.  After  twenty  years  of  performing their unique blend of folk, punk, jazz and progressive rock, they continue to  amass  incredible  critical  acclaim  for every new recording and attract fans in their thousands at shows worldwide.

Selecting songs With such an immense collection of material to draw from, a double album seemed

the  best  format  to  fairly  represent  the breadth  of  the  band’s  work.  Barman shared the rationale behind their creative thinking,  “We  always  knew  that  we  were going to do a double album because we wanted to bring out the softer songs, the ballads,  separately.  There  were  two  reasons for that; one is that they almost never become a single and the second reason is that  actually  I  think  the  softer  songs  are some of our best. If you play them all together it shows a whole other side of us that was always there, and which the diehard  fans  know  about,  but  was  never