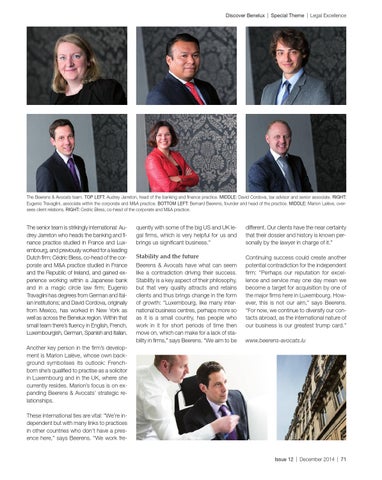 The senior team is strikingly international: Audrey Jarreton who heads the banking and finance practice studied in France and Luxembourg, and previously worked for a leading Dutch firm; Cédric Bless, co-head of the corporate and M&A practice studied in France and the Republic of Ireland, and gained experience working within a Japanese bank and in a magic circle law firm; Eugenio Travaglini has degrees from German and Italian institutions; and David Cordova, originally from Mexico, has worked in New York as well as across the Benelux region. Within that small team there’s fluency in English, French, Luxembourgish, German, Spanish and Italian.

quently with some of the big US and UK legal firms, which is very helpful for us and brings us significant business.”

different. Our clients have the near certainty that their dossier and history is known personally by the lawyer in charge of it.”

Stability and the future

Continuing success could create another potential contradiction for the independent firm: “Perhaps our reputation for excellence and service may one day mean we become a target for acquisition by one of the major firms here in Luxembourg. However, this is not our aim,” says Beerens. “For now, we continue to diversify our contacts abroad, as the international nature of our business is our greatest trump card.”

Beerens & Avocats have what can seem like a contradiction driving their success. Stability is a key aspect of their philosophy, but that very quality attracts and retains clients and thus brings change in the form of growth: “Luxembourg, like many international business centres, perhaps more so as it is a small country, has people who work in it for short periods of time then move on, which can make for a lack of stability in firms,” says Beerens. “We aim to be

Another key person in the firm’s development is Marion Lalève, whose own background symbolises its outlook: Frenchborn she’s qualified to practise as a solicitor in Luxembourg and in the UK, where she currently resides. Marion’s focus is on expanding Beerens & Avocats’ strategic relationships. These international ties are vital: “We’re independent but with many links to practices in other countries who don’t have a presence here,” says Beerens. “We work fre-