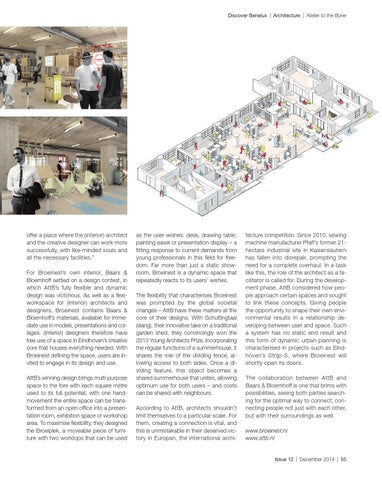 offer a place where the (interior) architect and the creative designer can work more successfully, with like-minded souls and all the necessary facilities.” For  Broeinest’s  own  interior,  Baars  & Bloemhoff settled on a design contest, in which  AttB’s  fully  flexible  and  dynamic  design was victorious. As well as a flexiworkspace  for  (interior)  architects  and  designers,  Broeinest  contains  Baars  & Bloemhoff’s materials, available for immediate use in models, presentations and collages.  (Interior)  designers  therefore  have free use of a space in Eindhoven’s creative core that houses everything needed. With Broeinest defining the space, users are invited to engage in its design and use.  AttB’s winning design brings multi-purpose space to the fore with each square metre used  to  its  full  potential;  with  one  handmovement the entire space can be transformed from an open office into a presentation room, exhibition space or workshop area. To maximise flexibility, they designed the Broeiplek, a moveable piece of furniture with two worktops that can be used

as the user wishes: desk, drawing table, painting easel or presentation display – a fitting response to current demands from young  professionals  in  this  field  for  freedom.  Far  more  than  just  a  static  showroom, Broeinest is a dynamic space that repeatedly reacts to its users’ wishes.  The flexibility that characterises Broeinest was  prompted  by  the  global  societal changes – AttB have these matters at the core  of  their  designs.  With  Schuttingtaal (slang), their innovative take on a traditional garden  shed,  they  convincingly  won  the 2013 Young Architects Prize. Incorporating the regular functions of a summerhouse, it shares  the  role  of  the  dividing  fence,  allowing  access  to  both  sides.  Once  a  dividing  feature,  this  object  becomes  a shared summerhouse that unites, allowing optimum use for both users – and costs can be shared with neighbours.    According  to  AttB,  architects  shouldn’t limit themselves to a particular scale. For them, creating a connection is vital, and this is unmistakable in their deserved victory in Europan, the international archi-

tecture competition. Since 2010, sewing machine manufacturer Pfaff’s former 21hectare  industrial  site  in  Kaiserslautern has  fallen  into  disrepair,  prompting  the need for a complete overhaul. In a task like this, the role of the architect as a facilitator is called for. During the development phase, AttB considered how people approach certain spaces and sought to  link  these  concepts.  Giving  people the opportunity to shape their own environmental  results  in  a  relationship  developing between user and space. Such a  system  has  no  static  end  result  and this  form  of  dynamic  urban  planning  is characterised in projects such as Eindhoven’s  Strijp-S,  where  Broeinest  will shortly open its doors. The  collaboration  between  AttB  and Baars & Bloemhoff is one that brims with possibilities, seeing both parties searching for the optimal way to connect; connecting people not just with each other, but with their surroundings as well.  www.broeinest.nl www.attb.nl