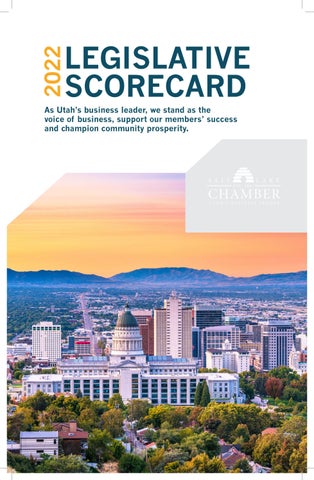 As Utah’s business leader, we stand as the voice of business, support our members’ success and champion community prosperity.

DEAR BUSINESS LEADER, The 2022 Legislative Session was an intense period for lawmakers and advocates working to represent their constituents and to improve our state. Over the 45-day session, the legislature passed 513 bills and a record $25 billion budget, with a significant increase in education funding, historical investment in infrastructure and water conservation, notable social services, and a tax cut for Utahns. Overall, this was a very successful legislative session for the business community, both employers and employees. During the session, the Salt Lake Chamber tracked and monitored 240 business-related bills and charted a path to build on the new economic geography of the state. From the state’s housing affordability challenges to COVID-19 regulations in businesses, lawmakers showed resolve in tackling the problems Utahns face. This new geography required a renewed focus both on business issues and quality of life. The Chamber’s Board of Directors, with input from our various committees, task forces and industry roundtables, established top priorities that aligned with our Public Policy Guide as Priority Votes. Of the Chamber’s priority legislation, all nine priority bills successfully passed through both chambers. We are also happy to report that none of the bills opposed by the Chamber passed. These wins did not happen by chance; they required a concerted effort from our policy staff and high-level advocacy from key business leaders. Ultimately, this year’s legislative session was a success for the Chamber’s legislative priorities and the Utah business community. We appreciate the work of our legislators and want to recognize their efforts to continue Utah’s legacy as one of the ‘Best States for Business.’ We offer a hearty thank you to this year’s Legislative Business Champions. Sincerely,

of Legislation Introduced by House or Senate

513 BILLS PASSED 496 signed, 1 vetoed and 3 no signatures provided by the Governor

3 OPPOSED BILLS 3 of which did not pass

LEGISLATIVE SESSION HIGHLIGHTS During the legislative session, the Salt Lake Chamber Board of Directors designates top priorities of the business community to be considered as “priority votes.” These bills are indicated with an asterisk. BUSINESS CLIMATE &amp; TAXES SB 59, Tax Amendments Sponsored by Sen. Dan McKay Offers a $193 million tax cut and provides an across-the-board tax cut and an earned income tax credit to support lower-income earners in Utah. The Chamber advocated for these tax cuts, especially the earned income portion as an anti-poverty mechanism to lift Utah families into the middle class. HB 444, Income Tax Revisions* Sponsored by Rep. Robert Spendlove Provides a pass-through tax allowance that lowers federal income taxes, and will lower the federal tax burden for many Utah business owners while not decreasing state tax revenue. The Chamber advocated for and led a coalition to support this legislation that effectively allows a business to avoid the federal tax deduction cap. HB 35, Economic Development Modifications* Sponsored by Rep. Stephen Handy Required the Unified Economic Opportunity Commission to identify targeted industries for economic development in the state, such as advanced manufacturing, life sciences, financial services, technology, and aerospace and defense, and modified the score of economic development tax credits (EDTIF). The Chamber supported this bill as it will provide more economic development support for rural communities. SB 212, Manufacturing Modernization Grant Program* Sponsored by Sen. Ann Millner Creates a manufacturing grant program under the Utah Office of Economic Opportunity with the purpose to establish, relocate, retain or develop manufacturing in the state. The Chamber supported this bill as part of our efforts to provide statewide, industry-specific technical and vocational training investments to include employer-led earn and learn opportunities. As manufacturing is expanding in our state, programs to enhance its development will create jobs and stabilize supply chains.

EDUCATION HB 193, Full-Day Kindergarten* Sponsored by Rep. Steve Waldrip Directs school districts to provide an optional all-day kindergarten program. The Chamber supported and endorsed this bill as it helps give parents options for returning to the workforce. Overall Budget Lawmakers passed a 6% increase to per-pupil funding, and also approved $10 million to go toward teacher bonuses given the strain they faced with the omicron surge. Many educators stepped up and worked overtime to substitute, as well for colleagues, during the variant spike in this winter. These bills support the Chamber’s priorities for developing an educated workforce and supporting the education community.

HOUSING AFFORDABILITY SB 140, Housing and Transit Reinvestment Zone Amendments* Sponsored by Sen. Wayne Harper Allows housing and transit reinvestment zones around light rail and bus rapid transit and sets limits to the number allowed. The Chamber prioritized this bill because it seeks to expand housing and transit reinvestment zones along light rail or bus rapid transit. HB 462, Housing Affordability Amendments* Sponsored by Rep. Steve Waldrip Requires municipalities to create moderate-income housing plans and creates a prioritization for the Transportation Investment Funding (TIF). The Chamber advocated for the successful passage of this legislation as housing is a critical problem for Utah.

DIVERSITY AND INCLUSION SB 216, Modifications to Drivers License Examinations* Sponsored by Sen. Luz Escamilla Requires the Driver License Division to provide the examinations of a person’s knowledge of the state traffic laws in the top five languages spoken in the state. The Chamber supported efforts to help refugees and new Utah residents ability to pass a driver’s license test in their native language.

2022 LEGISLATIVE BUSINESS CHAMPIONS The Legislature plays a key role in preserving Utah’s pro-business climate, and every year the Salt Lake Chamber honors legislators who support a pro-economy and pro-business agenda with the title of “Business Champion.” The designation of Business Champion is directly tied to a legislator’s voting record on Salt Lake Chamber “Priority Votes.” Legislators receive the award for supporting at least 80 percent of the Chamber’s priority bills.

THE SALT LAKE CHAMBER IS PROUD TO PRESENT THE 2022 “LEGISLATOR OF THE YEAR” AWARD TO REPRESENTATIVE STEVE WALDRIP Representative Steve Waldrip has represented House District 8 since 2019. Throughout that time, Rep. Waldrip has been a champion for the business community and has supported Salt Lake Chamber priorities. During the 2022 Legislative Session, Rep. Waldrip sponsored two of the Chamber’s priority bills, including HB 193, Full-Day Kindergarten, and HB 462, Housing Affordability Amendments. During his career, Rep. Waldrip has been instrumental in building Weber County. For example, he managed and marketed the new development for Business Depot Ogden (BDO), which created 4,000 jobs in Weber County, and implemented economic development plans for the 1100 acre BDO project. He has also been involved in community and charitable projects, including the Rocky Mountain Homes Fund, which provides opportunities for homeownership to working-class families in Ogden. He currently co-chairs the Commission on Housing Affordability, where he champions legislation and policy that helps individuals and families find affordable housing options. Rep. Waldrip’s experience in law, economic development and real estate, and service on business and community-based boards allowed him to work collaboratively to move forward critical education, housing and business-related bills. For these and many other reasons, the Salt Lake Chamber is proud to honor Representative Waldrip as the 2022 Legislator of the Year. Thank you, Representative Waldrip.