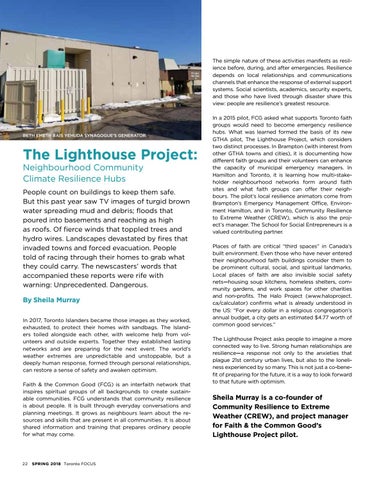 The simple nature of these activities manifests as resilience before, during, and after emergencies. Resilience depends on local relationships and communications channels that enhance the response of external support systems. Social scientists, academics, security experts, and those who have lived through disaster share this view: people are resilience’s greatest resource.

The Lighthouse Project: Neighbourhood Community Climate Resilience Hubs People count on buildings to keep them safe. But this past year saw TV images of turgid brown water spreading mud and debris; floods that poured into basements and reaching as high as roofs. Of fierce winds that toppled trees and hydro wires. Landscapes devastated by fires that invaded towns and forced evacuation. People told of racing through their homes to grab what they could carry. The newscasters’ words that accompanied these reports were rife with warning: Unprecedented. Dangerous. By Sheila Murray In 2017, Toronto Islanders became those images as they worked, exhausted, to protect their homes with sandbags. The Islanders toiled alongside each other, with welcome help from volunteers and outside experts. Together they established lasting networks and are preparing for the next event. The world’s weather extremes are unpredictable and unstoppable, but a deeply human response, formed through personal relationships, can restore a sense of safety and awaken optimism. Faith & the Common Good (FCG) is an interfaith network that inspires spiritual groups of all backgrounds to create sustainable communities. FCG understands that community resilience is about people. It is built through everyday conversations and planning meetings. It grows as neighbours learn about the resources and skills that are present in all communities. It is about shared information and training that prepares ordinary people for what may come.

In a 2015 pilot, FCG asked what supports Toronto faith groups would need to become emergency resilience hubs. What was learned formed the basis of its new GTHA pilot, The Lighthouse Project, which considers two distinct processes. In Brampton (with interest from other GTHA towns and cities), it is documenting how different faith groups and their volunteers can enhance the capacity of municipal emergency managers. In Hamilton and Toronto, it is learning how multi-stakeholder neighbourhood networks form around faith sites and what faith groups can offer their neighbours. The pilot’s local resilience animators come from Brampton’s Emergency Management Office, Environment Hamilton, and in Toronto, Community Resilience to Extreme Weather (CREW), which is also the project’s manager. The School for Social Entrepreneurs is a valued contributing partner. Places of faith are critical “third spaces” in Canada’s built environment. Even those who have never entered their neighbourhood faith buildings consider them to be prominent cultural, social, and spiritual landmarks. Local places of faith are also invisible social safety nets—housing soup kitchens, homeless shelters, community gardens, and work spaces for other charities and non-profits. The Halo Project (www.haloproject. ca/calculator) confirms what is already understood in the US: “For every dollar in a religious congregation’s annual budget, a city gets an estimated $4.77 worth of common good services.” The Lighthouse Project asks people to imagine a more connected way to live. Strong human relationships are resilience—a response not only to the anxieties that plague 21st century urban lives, but also to the loneliness experienced by so many. This is not just a co-benefit of preparing for the future, it is a way to look forward to that future with optimism.

Sheila Murray is a co-founder of Community Resilience to Extreme Weather (CREW), and project manager for Faith & the Common Good’s Lighthouse Project pilot.